On Monday I weighed in on the Daily Show controversy surrounding the recent appearance of Andrew Napolitano, specifically looking at the Fugitive Slave Act. Whereas the historians on Jon Stewart’s panel seized upon Napolitano’s remarks attributing enforcement of the Fugitive Slave Act to Lincoln, I pointed out that at least in the narrow sense Napolitano was correct (even as his phrasing leaves much to be desired).

In one very specific and noteworthy instance, Lincoln did indeed directly support the enforcement of the Fugitive Slave Act in the District of Columbia by his close friend, U.S. Marshal Ward Hill Lamon. He did so by personally drafting Lamon’s answer to a hostile Senate inquiry about the enforcement of the act in late 1861. Over the next several months Lincoln continued to back Lamon as well and intervened on his behalf several times when abolition-minded members of the Senate attempted to have him removed from office or to prevent his oversight of the D.C. Jail, which housed the fugitive slaves.

From an abolitionist perspective, Lincoln’s support of Lamon was a low point of his presidency. Abolitionist newspapers considered it an outrage and harshly denounced the practice, as this excerpt from the Liberator illustrates: 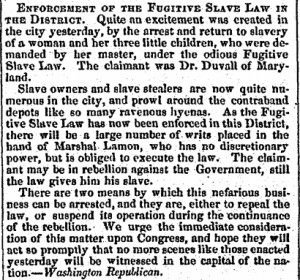 It bears note though that Lincoln’s support of Lamon was by no means a full fledged endorsement of the Fugitive Slave Act, nor should it be interpreted as such. Contemptible though it may have been, for a little needed perspective consider this limited enforcement along side some other presidents. Consider this incident in 1854 when Franklin Pierce dispatched over 2,000 soldiers to Boston to forcibly retrieve a fugitive slave named Anthony Burns. Unlike some of his predecessors, Lincoln was no slave hound.

But Lincoln did permit the enforcement of the Fugitive Slave Act in states where slavery still existed, and in the District of Columbia case of Marshal Lamon this entailed his direct support.

Why? I’ll posit an explanation: the Fugitive Slave Act was a sensitive political subject for an administration that was perceived as being hostile to slavery, and no place more strongly than the slaveholding border states of the upper south – Maryland, Kentucky, Delaware, Missouri, and – yes – the District of Columbia. Lincoln was also quite leery – especially in the early days of the Civil War – about persistent threats of secession in this region. He therefore continued enforcement in loyal states where slavery already existed as an act of political good will to keep them in the union and keep them on the northern side of the war. Doing so was also completely consistent with his public statements in support of the Fugitive Slave Act. As he acknowledged even as late as his 2nd annual message to Congress in December 1862, this measure carried direct implications for the slave states that remained vis-a-vis those that seceded: “The fact of separation, if it comes, gives up on the part of the seceding section the fugitive-slave clause, along with all other constitutional obligations upon the section seceded from, while I should expect no treaty stipulation would ever be made to take its place.”

It is doubtful that Lincoln was ever an enthusiastic backer of this measure as it cut against his antislavery beliefs. James Oakes was therefore correct to point to the distinction between aggressive enforcement of the measure across the south – which did not happen – and acquiescence to its continued enforcement in the loyal slave states of the upper south. But in the DC case though, Lincoln did more than acquiesce to the existing law. And it is in that sense that Napolitano was technically, if narrowly, correct as Lincoln directly supported and sustained Lamon’s enforcement of the Fugitive Slave Act. The Senate forced his hand on the issue – and quite intentionally so – but the politics of the situation demanded his attention to the border states over the abolitionists of New England, and by supporting Lamon’s actions Lincoln signaled he would support them over more radical antislavery forces in his party.