In August 1863 the U.S. Emigration Office sent a small delegation of African Americans to British Honduras to investigate its potential for colonization. They traveled with John Hodge, the recipient of Lincoln’s June 13, 1863 order authorizing the recruitment of blacks for resettlement abroad. The American party was led by J. Willis Menard, a free black newspaperman who supported black repatriation to Africa and had worked as a clerk for James Mitchell at the Department of the Interior. They returned to the United States in September and filed a report – now unfortunately lost – on their findings with Mitchell’s office. Menard and a second member of the group, Charles Babcock, also presented the British Honduras project to Rev. Henry Highland Garnet’s African Civilization Society in New York City. 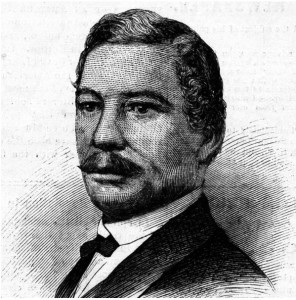 Menard’s delegation still left a paper trail by checking in at the U.S. Consul in Belize City, and through articles about their purpose in the British Anti-Slavery Reporter and the American Liberator – two abolitionist newspapers that caught wind of their visit. After returning by way of New York, Menard also drafted this letter to Abraham Lincoln offering to forward his report. It is currently held by the National Archives.

Menard later gained distinction in his own right after the Civil War by becoming the first African-American ever elected to the United States House of Representatives, though he was refused his seat after Congress accepted a challenge to his election by a white candidate. 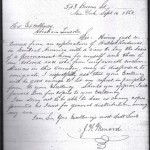 Sir: Having just returned from an exploration of British Honduras in Central America with a view to lay the basis of a permanent home for myself and those of my colored race who, from unfavorable circumstances in this country, may be disposed to emigrate, I respectfully ask that your Excellency will be good enough to let me report, in pamphlet form, to your Excellency. Should you approve, I will forward some few copies to your Excellency.

I am sorry not to be able to have as many copies printed as I need for general distribution among my race.

I am, Sir, Your Excellency’s most obedt. Servt.