In July of 1861 Abraham Lincoln received a memorial from Connecticut Governor William A. Buckingham, recommending the appointment of James B. Merwin as a Chaplain in the Union army. Several documents from Lincoln pertaining to Merwin’s appointment appear in Roy P. Basler’s Collected Works of Abraham Lincoln, as does an excerpted note from Merwin indicating “The President appointed me or wrote an order for my appointment Sept. 12th. 1861.” Basler was unable to locate the referenced document, or any other appointment prior to 1862 though and stated as much in the accompanying annotations.

The original of Merwin’s appointment has not been found. The copy below comes from Merwin’s file with the Adjutant General’s Office (National Archives, Record Group 94, M 619), and accompanies a second letter from the president transmitting the document to Adjutant General Lorenzo Thomas on November 4. 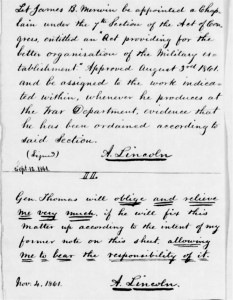 Let James B. Merwin be appointed a Chaplain under the 7th section of the Act of Congress, entitled an “Act providing for the better organization of the military establishment” approved August 3rd 1861, and be assigned to the work indicated within, whenever he produces at the War Department evidence that he has been ordained according to said Section.

Gen. Thomas will oblige and relieve me very much if he will fix this matter up according to the intent of my former note on this sheet allowing me to bear the responsibility of it.

NOTE: While these documents are otherwise routine military appointments, some observant readers may recognize Merwin’s name from later Lincoln lore. An elderly Merwin emerged on the Civil War lecture circuit in 1904 where he related a series of purported anecdotes about Lincoln in which he generally ascribed alcohol Prohibitionist sentiments to the 16th President and – in one instance – also claimed to have been party to Benjamin Butler’s colonization discussions in 1865. The credibility of Merwin’s tales has long been in doubt by historians owing to their lack of documentation and seeming tendency to borrow from other published works, including Butler’s autobiography. A lengthy discussion of the curious case of James B. Merwin by Prohibition historian Richard Hamm may be found at this link.