This brief note from Abraham Lincoln was attached to a proposed addendum to the Chiriqui contract with Ambrose W. Thompson to transport freed slaves to a tract of land in Panama. Negotiated in September 1862, the Chiriqui project was Lincoln’s first major attempt at the colonization. The scheme stalled that winter and was never acted upon. The following Spring Lincoln’s attention turned to other Central American locals, including British Honduras.

The note was drafted in another person’s handwriting, though the signature is in Lincoln’s pen. It does not appear in Basler’s Collected Works of Abraham Lincoln, though it refers to an accompanying paper from the same contract (Vol. 5, p. 413). This document currently resides in the National Archives. 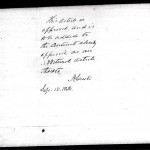 This article is approved and is to be added to the contract already approved, as an additional article thereto.

Article 9th — To provide against the United States being compromised by this contract in any manner in its treaty stipulations with New Granada or the U.S. of Colombia it is agreed that the said Thompson is to be responsible for the good behavior of persons of color whom he may receive from the United States upon his lands, or employ in his mines, or in works of improvement, and if any of said persons become inimical by reason of bad behavior or refuse to obey the Laws and Authorities, they are to be restrained or removed by said Thompson; but if said persons are excessive in number beyond the capacity of his own vessels then the United States is to afford such are therefor as may be requisite.