This letter in Lincoln’s hand was found in the Adjutant General’s file for Secretary of War Simon Cameron at the National Archives (RG 94, M619). It is addressed simply to the “Atty General,” Edward Bates, and refers to the chaos that existed in the wake of the St. Louis riots of May 1861, including the anti-German sentiments of some southern sympathizers. 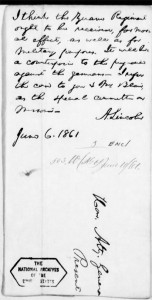 I think the Zuave Regiment ought to be received, for moral effect, as well as for military purposes. It will be a counterpoise to the prejudice against the Germans. I refer the case to you and Mr. Blair, as the special committee on Missouri.