Abraham Lincoln signed this order to John Hodge, representative of the British Honduras Company, and S.R. Dickson, colonial agent from Guiana, after a meeting at the White House on June 13, 1863. The paper was drafted by Emigration Commissioner James Mitchell and authorized the two men to begin recruiting African American laborers for freedmen’s  settlements in their respective colonies. The original document was logged in the Interior Department records and with the British Foreign Office. It was subsequently lost though and has not been seen since  1904, when this transcript was made by a reporter for the Macon Telegraph who had been given access to the recently deceased Mitchell’s papers. Note the reporter erroneously transcribed the date as September 11, 1863, though the meeting itself took place in June. 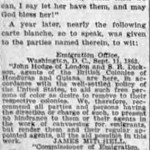 John Hodge of London, and S. R. Dickson, agents of the British Colonies of Honduras and Guiana, are here in accordance with the well settled policy of the United States, to aid such free persons of color as desire to remove to their colonies. We, therefore, recommend all parties and persons having the direction or charge of such, to present no hindrance to them or their agents in the work of canvassing for emigrants, but to render them and their regularly appointed agents, all the aid possible in this work.