The policy of colonization often strikes the modern reader as unusual and extreme, owing no small part to the implicit racial bigotry of the concept. Yet in the 19th century, colonization was a commonly espoused “solution” to racial strife. The motives that prompted colonizationists were by no means uniform, though some including Abraham Lincoln professed their support out of fear for racial violence in the postwar South.

While he was not a particularly vocal colonizationist compared to some of his contemporaries, General Benjamin F. Butler certainly entertained the idea at multiple points in his tumultuous political career. Still, some skeptics of Butler’s “colonization testimony” about an interview with Lincoln on the policy in April 1865 occasionally counter that he may have fabricated the story to make himself appear to be a racial liberal in comparison to the President.  This letter from 1877 seems to belie the suggestion by placing Butler’s known views much closer to those he assigned Lincoln. 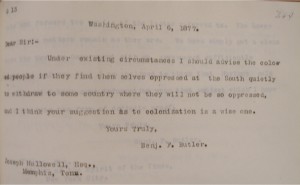 Under existing circumstances I should advise the colored people if they find themselves oppressed at the South quietly to withdraw to some country where they will not be so oppressed, and I think your suggestion of colonization is a wise one.