On April 17, 1862 Abraham Lincoln was visited by Alexander Crummell, an African-American missionary who settled in Liberia. Crummell approached Lincoln to promote a program of voluntary black repatriation to Africa as an Emigration Agent on behalf of the Liberian government. He was accompanied by J.D. Johnson, another Liberian representative in the United States. The meeting is noteworthy for its date as it occurred only one day after Lincoln signed the District of Columbia Emancipation Act, which also allocated $100,000 to promote the colonization of liberated slaves.

While their discussion undoubtedly touched on the implementation of this new policy, a Boston newspaper report of Lincoln’s meeting with Crummell erroneously claimed that colonization was to be involuntary – something Lincoln and Crummell alike opposed. In the weeks following the newspaper report, Crummell and Johnson wrote President Lincoln to request a written correction on this point.

Lincoln’s reply has been occasionally acknowledged in the secondary historical literature, including Gregory Rigsby’s biography of Crummell. It did not appear in Basler’s Collected Works of Abraham Lincoln, nor has the original letter been found. Two print copies were made in 1862 though, first in the Boston Herald’s correction of their earlier story and again in the annual report of the Massachusetts Colonization Society. Both are reproduced below: 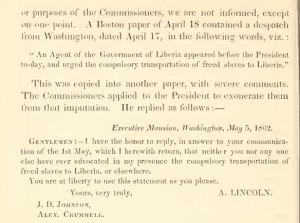 Gentlemen : — I have the honor to reply, in answer to your communication of the 1st May, which I herewith return, that neither you nor any one else have ever advocated in my presence the compulsory transportation of freed slaves to Liberia, or elsewhere.

You are at liberty to use this statement as you please.