In August 1862 Abraham Lincoln created the United States Emigration Office, a new federal agency to oversee colonization. To head the new project Lincoln tapped James Mitchell, an old acquaintance he knew from his involvement in the state colonization society of Illinois. Lincoln’s creation of the agency directly anticipated with his notorious pro-colonization “Address to a Deputation of Negroes,” given 10 days later at the White House. The original letter of appointment from Lincoln has since been lost, though this copy – made by a secretary at the Interior Department – currently resides at the National Archives. 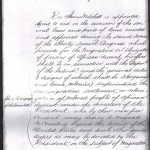 Copy of Commission of Emigration Agency

Rev. James Mitchell is appointed Agent to aid in the execution of the several laws and parts of laws enacted and approved during the second session of the Thirty-Seventh Congress, which provide for the Migration or Colonization of persons of African descent. His office shall be in connection with the Department of the Interior, and the “general duties and designs of which shall be to organize and locate colonies, superintend the immigration, settlement, or colonization of colored people of African descent under the direction of the President, who, by their own free consent may desire to migrate to countries beyond the limits of the United States, and such other general duties as may be directed by the President, on the subject of migration.”

(This is the language of the bureau bill)