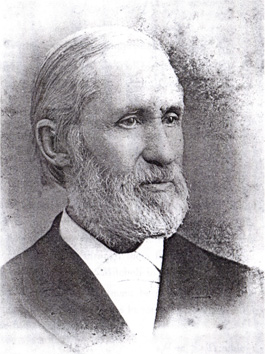 James Mitchell (1818-1903) held the position of Emigration Commissioner in the Lincoln White House. Though obscure today, he played a central role in Abraham Lincoln’s colonization policies during the Civil War.

Born in Northern Ireland, Mitchell emigrated to Indiana in the 1830’s and became an anti-slavery, pro-colonization preacher in the Methodist church. He was appointed Colonization Agent for the state of Indiana by Gov. Joseph A. Wright, and first met Abraham Lincoln in 1853 during a visit to promote colonization in neighboring Illinois. Shortly after his election as president, Lincoln tapped Mitchell to come to Washington and continue his work on colonization in the Interior Department.

When Congress appropriated $600,000 for colonization purposes in 1862, Lincoln created the U.S. Emigration Office to oversee the policy and  appointed Mitchell as its first and only commissioner.

While working in this capacity Mitchell oversaw the negotiations with British Honduras to find a resettlement location for the slaves freed by the Emancipation Proclamation. He dispatched a delegation of free African Americans to investigate the proposed site in 1863, and assisted British colonial agents in their efforts to secure a ship for the first wave of settlers. Mitchell’s agency faltered in 1864 though amidst a feud with Interior Secretary John P. Usher over the colonization budget.

He retired to rural Georgia after the Civil War and founded a series of schools through the Methodist church. Unfortunately Mitchell took most of the records from the Emigration Office with them, their last known whereabouts being in the hands of his heirs at the time of his death in 1903.