This letter from Lincoln directed John Hay to travel to New York in 1864 on political business. Accompanying letters in the Collected Works of Abraham Lincoln indicate the trip included a visit with Horace Greeley of the New York Tribune. This particular letter does not appear in Basler’s edition. It was found in the Adjutant General’s records (RG 94, M619). 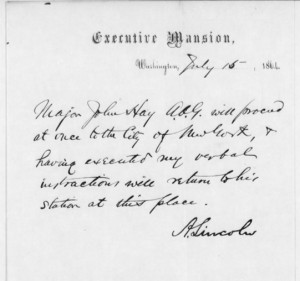 Major John Hay, A.A.G., will proceed at once to the City of New York, &  having executed my verbal instructions, will return to his station at this place.