On September 9, 1864 President Lincoln wrote Attorney General Edward Bates on behalf of James Mitchell, recently the head of the Emigration Office. Mitchell’s salary had been suspended by Interior Secretary John P. Usher following a lengthy budgetary feud and the repeal of colonization funding by Congress. Lincoln’s request sought a legal opinion that would allow him to retain Mitchell’s services, and was answered by Bates on November 30 in a record on file at the Library of Congress (page 1, page 2). Unfortunately the original letter by Lincoln has been lost and may have fallen victim to a fire that claimed several of Bates’ papers. It was recorded though in an incoming log at the Attorney General’s office, the original of which survives at the National Archives. 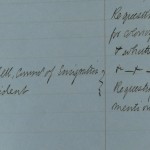 Requesting opin. as to whether provn’s of law for colonization of colored persons have ceased & whether office of Comm. of Emigration continues. &—&— Endorsed on commt. to Pres’t from Jas. Mitchell requesting opinion of Atty. Gen’l on points above mentioned to be ordered by Prest