Did Rep. Thaddeus Stevens pledge to support the revival of the colonization office during Lincoln’s second term? That is the direct insinuation of an unsent letter from 1865 bearing the Radical Republican leader’s endorsement.

As detailed in Colonization after Emancipation, Congress repealed the funding for the federal Emigration Office in early July 1864 following a prolonged budgetary dispute between colonization commissioner James Mitchell and the Secretary of the Interior. The repeal effectively suspended Mitchell’s salary and shuttered his office. Mitchell still had an ally in the White House however, and later that fall President Lincoln asked the Attorney General if he could legally restore Mitchell to his post.

Mitchell also pressed his case with Thaddeus Stevens, chairman of the powerful House Ways & Means Committee, in late January 1865 and, as the following letter attests, succeeded in gaining Stevens’ support for a new appropriation to restore the Emigration Office. Stevens “cheerfully recommend(ed)” the proposal in an endorsement attached to a letter requesting “the estimates that should be allowed” to reestablish Mitchell’s office “as Congress had no design in cutting off” his position when it rescinded a $600,000 colonization subsidy the previous summer. Indeed, Mitchell had hoped to finance future colonization ventures from a separate dedicated account in the Treasury Department.

Mitchell had intended to forward the endorsement to Lincoln following the organization of the newly-created Freedmen’s Bureau, which may have housed his reestablished office. He never got the opportunity owing to the president’s assassination on April 14 before a Freedmen’s Bureau director could be named. Mitchell later forwarded it to the Treasury Department as part of an unsuccessful claim to recover his suspended salary during the Johnson administration. 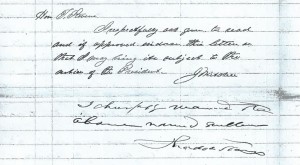 I respectfully ask you to read and if approved endorse this letter as that I may bring its subject to the notice of the President.

(endorsed below in Stevens’ handwriting)

I cheerfully recommend the above named settlement. Thaddeus Stevens