Though regulated and at times highly distorted, academic employment is fundamentally a creature of market forces. Full time academic employment has actually kept pace with student enrollment growth since at least 1970, contrary to a number of myths that are often carelessly repeated in the press and by adjunct activists. Full time jobs are not disappearing under any reasonable metric – in fact they are growing at a very stable pace. And yet the academic job marketplace is also saturated, with the number of applicants far exceeding the number of available positions.

Part of this saturation problem is a simple matter of unrealistic expectations on the part of the applicants. Surveys have consistently shown that only 30% of adjuncts possess a doctorate in their fields, and perhaps even fewer. PhDs and equivalent terminal degrees are widely considered a bare minimum qualification to be considered for a tenure-track position at almost any traditional 4-year college or university. Since a full two-thirds of adjuncts claim they are seeking tenure-track appointments according to another recent survey, it is also apparent that a large number of adjunct applicants are seeking jobs for which they lack the minimal qualifications.

We also know that the adjuncting phenomenon does not apply to all disciplines equally. The 2012 Coalition on the Academic Workforce survey found that adjuncting was particularly concentrated in the humanities, with 42.3% of all respondents falling in one of these fields. Still, within the humanities another pronounced disparity emerges. Fields like History, Philosophy, Anthropology, and even Studio Art each comprise between 4% and 6.6% of the adjunct community, at least among survey respondents. In stark contrast, one field stands out above the rest at an astounding 16.4% of all adjuncts: English and Literature.

Looking at graduate degree production in the humanities, it is not difficult to see exactly why English and Literature make up a disproportionate share of the adjuncting world. It has practically nothing to do with the alleged “exploitation” of adjunct labor, with mistreatment or the lack of “fair wages,” or with the decline of tenure. English/Literature departments are presently saddled with an adjunct glut due to multiple decades of churning out graduate degrees at rates that are far in excess of practically anything else in the humanities, at least relative to the size of the discipline.

English/Literature departments presently suffer from an obscene overproduction of degrees at both the Master’s and PhD levels. In several recent years, the number of advanced Literature degrees granted has even exceeded the output of all other humanities combined. This much is readily attested in the latest statistics on advanced degree conferral in the humanities, where Literature is actually parsed between English, foreign language, and comparative degrees.

When counted together in a single category, Literature degree production completely dwarfs all other humanities. The following depiction shows MAs in Literature, reflecting the dominance of Master’s degrees among current adjunct faculty. 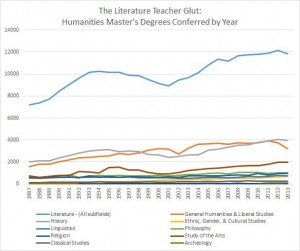 The same trend also holds at the PhD level. Since a PhD is a significantly more focused degree with fewer applications outside of the academic study of literature, this pattern is likely not a matter of literature being a popular discipline to pursue in graduate school prior to non-academic employment. A master’s degree holder might conceivably seek a career in editing, journalism or a job with related skill sets, though a PhD would likely be overkill in such positions. And yet the PhD glut is as bad as the MA glut, at least relative to the other humanities: 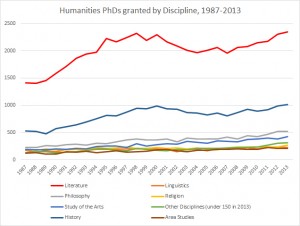 All things considered, the complete saturation of the academic employment market in English/Literature departments should accordingly come as no surprise, and with it the disproportionate adjunct presence in English/Literature departments. These departments generally occupy a footprint on campus that is comparable to other major humanities such as History and Philosophy, and yet they are dumping between two and four times as many graduate degrees into a crowded academic job market. With degree production practices that are significantly higher than any comparable discipline in the academy, it is also likely that these programs are drawing their student base from a higher percentage of marginally qualified graduates than most other fields, thereby further diluting the value of an advanced English or Literature credential. Ironically, the persons most harmed by this practice might be the highly qualified candidates at the top end of the discipline’s PhD programs who find themselves thrust into an academic job market that is cluttered with decades of underperformers due to the rampant overproduction of advanced degrees.

It also points to a very different solution to the “beleaguered adjunct” problem than most activist discussions permit. If one were genuinely inclined to reduce the number of adjuncts in English and Literature departments, the answer is to quit issuing Literature MAs and PhDs at astronomical rates.