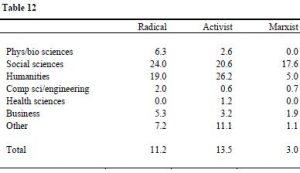 Jason Brennan authored a long post the other day that presented multiple challenges to anti-speech activism on campus. The entire piece is worth reading, but I wanted to call attention to one point in particular:

Some people say we can’t “platform” ideas that could be used for evil. I look forward to seeing those same people demand we shut down all Marxist talks and fire all the Marxist scholars, since Marxist ideas led to 100 million or more democides in the 20th century.

The underlying argument – that certain ideas are too “dangerous” to be tolerated on campus, thereby making them “exempt” from the principles of free speech and academic freedom alike – is an increasingly common one among campus radicals. Following recent events at Berkeley, the editor of a student paper ran an entire series political editorials in this vein espousing the use of violence to shut down controversial speakers and ideas. The logic of this claim is symptomatic of a frenzied paranoia afflicting the illiberal campus left, as I discussed in my last post. It is also deeply ingrained in the pseudoscholarly fever swamp of Critical Theory, exemplified in Herbert Marcuse’s 1965 essay espousing a philosophically incoherent “liberating tolerance” that intentionally excludes beliefs on the political right by deeming them “repressive” and oppositional to various pet causes of revolutionary radicals. Marcuse justified his position by citing the horrors of Nazism and Fascism, thereby attempting to position intolerance as a necessary defensive bulwark against atrocity. The intended consequence was a free license to like-minded radicals to silence their opponents in the name of inhibiting any belief they deem dangerous:

They would include the withdrawal of toleration of speech and assembly from groups and movements which promote aggressive policies, armament, chauvinism, discrimination on the grounds of race and religion, or which oppose the extension of public services, social security, medical care, etc. Moreover, the restoration of freedom of thought may necessitate new and rigid restrictions on teachings and practices in the educational institutions which, by their very methods and concepts, serve to enclose the mind within the established universe of discourse and behavior–thereby precluding a priori a rational evaluation of the alternatives.

The targets of Marcuse’s world have since multiplied to practically anything and everything that a self-appointed campus epistocracy of Critical Theorists deems even mildly offensive, hence the recent proliferation of “microaggression” reporting policies and the like from the basements of the English department and the cubicles of student affairs bureaucracies. Yet for all its pretenses of being a necessary defense against “dangerous” ideas, this line of argument suffers from a glaring vulnerability that Jason identifies above: Karl Marx.

Critical Theorists will no doubt carve themselves an exemption for atrocities committed in the “service of the revolution” or some similar nonsense, but the horrendous body count of Marxist communism is indisputable. The most commonly accepted estimate places the 20th century total at 100 million victims, with the repressive communist societies of the Soviet Union and Maoist China constituting the two deadliest regimes in all of human history. Lesser communist societies leave similarly devastating death tolls practically every place they are attempted, the only difference between them and Stalin being a matter of scale.

With a few noted exceptions who retreat into the Soviet equivalent of Holocaust denial, most modern Marxists try to dissociate themselves from these numbers by insisting the perpetrators were not sufficiently authentic adherents of Marxism. This excuse is intellectually flimsy, and tends to overlook the fact that every one of these regimes (1) considered itself Marxist, (2) believed itself to be implementing Marxist ideas, and (3) enjoyed alarming degrees of support and enthusiasm in its own time by contemporary Marxist intellectuals, particularly before their death tolls were widely known. All said, the empirical evidence of Marxism’s connections to unprecedented levels of death and devastation is impossible to escape.

All of this leads to an inescapable conclusion: If one admits the principle that academia is obliged to deny a platform to specific ideas on account of their demonstrated propensity to do harmful and horrendous things, then one must *necessarily* exclude Marxists from that platform on account of Marxism’s track record of murder and devastation, which is empirically unparalleled in all of human history.

To be completely clear, I make this observation as a free speech absolutist. I shudder at the thought of excluding even the most wrongheaded idea from free and open discussion – Marxism included – precisely because I value open inquiry as a principle onto itself and because I fear any power that could be turned around and abusively deployed against non-Marxist beliefs, my own included. We give the devil the benefit of law for our own safety’s sake. If one removes these absolute protections for free and open discussion and deems dangerous ideas unworthy of a platform, then the very same Marcusian activists that advanced this argument in the first place are made vulnerable to the track record of their own Marx-derived philosophical roots. Surely they are less-than-ready to grapple with the implication that vulnerability carries for their own standing on campus.

So how prevalent is Marxism in academia these days, and can we measure what the illiberal campus activists must logically be willing to forego if their argument on denying dangerous speech is admitted? There are many empirical dimensions to this question, almost all of which point to a sizable presence compared to society at large.

First, as I’ve pointed out previously, Karl Marx enjoys an elevated and disproportionately common presence on American university syllabi. By this metric, Marx’s Communist Manifesto is the single most frequently assigned text in the college classroom other than the Strunk and White grammar manual. While some of this standing obviously reflects the historical significance of communism in the past two centuries, its prominence also far exceeds other similar historically significant works of political philosophy. Only Plato’s Republic approaches these numbers among other major figures in the philosophical canon. Locke’s treatises, Hobbes’ Leviathan, Machiavelli’s the Prince, and Mill’s On Liberty don’t even come close. Marx’s use on syllabi also noticeably concentrates in certain disciplines in the humanities, though far less so in economics or the more empirical end of the social sciences.

Second, a handful of studies have actually sought to measure the number of faculty who self-identify as Marxists. The most recent comprehensive study is a survey conducted in 2006 by Neil Gross and Solon Simmons. The authors conducted a national poll of university faculty to ask them about their political self-identifications, including options to identify as “radical” and “marxist.”

The authors of this study downplayed the total number of Marxists they found, calling them “rare” and noting that they made up only 3% of all faculty. This figure includes respondents from the STEM fields, business schools, and medical professions though – all of which showed next to zero Marxist faculty members. Their breakdown appears in the figure at the top of the post.

A more complicated picture emerges though when we look at these survey results within other areas of the academy. As Bryan Caplan has pointed out, the Marxists (as well as radicals) actually concentrate in a few specific areas – and they do so with sizable numbers. The largest concentration of self-identified Marxist professors is in the social sciences at 17.5% (on top of that, 24% of social scientists identify as radical).

The same survey also published discipline-specific data on some of the larger disciplines within the social sciences. These results suggest that Marxist faculty also cluster at comparatively higher rates in specific disciplines. In the largest example they reported, 25.5% of Sociology faculty self-identified as Marxists.

(Note that holding the Marxist percentages constant is a conservative assumption. More recent faculty surveys conducted on a simpler left-right scale have shown a strong leftward shift in faculty ideology since 2006)

The BLS also estimates that approximately 136,000 professors are employed in the social sciences as a whole. At 17.5% held constant, there are about 23,800 self-described Marxist social science professors in the United States.

At these numbers (again assuming the 2006 survey breakdown is constant), sociologists would also make up about 17% of the Marxist professors who teach in the social sciences (for perspective, sociology accounts for about 11.8% of social science faculty as a whole).

These are admittedly rough calculations based on an survey that likely warrants updating in light of the more recent leftward shifting trend in faculty ideology. They also omit other left-leaning identifications such as “radical” that likely include faculty who share some favorable views of Marxism, such as the Critical Theorists who dominate many fields in the humanities. Both groups are common in the humanities and social sciences, though unfortunately the 2006 survey authors did not release enough information to parse out these overlaps. We may nonetheless add the 5% of humanities faculty who fall into the Marxist category by their own designation. Doing so, we get a combined total of about 31,600 self-identified Marxists between the humanities and social sciences.

I would argue that the concentration of Marxists in some academic disciplines are disproportionately high relative to the limited intellectual insights they provide – particularly given the disastrous track record of Marxist insights into social scientific matters, as seen in action across the past century or more. But I’d also contend that these faculty deserve the unwavering protections of the academic freedom to advance their scholarly research and of free speech to advance their arguments in an open societal discussion, even as I’d likely disagree with most of their specific insights.

The illiberal campus activists we’ve seen and heard so much from in recent years make no similar commitment to either of these protections, and in fact openly call for their removal in cases where they deem an alternative viewpoint “dangerous” or “evil.” In light of Marxism’s political track record, and given the high concentrations of Marxists in some of the same academic disciplines that cater to and advance these same illiberal anti-speech arguments, all I can say is this: be careful what you wish for.