In 1964 historian Richard Hofstadter wrote an essay for Harper’s Magazine entitled “The Paranoid Style in American Politics.” His thesis was a simple one – that American politics was “an arena for angry minds,” and that this anger often fomented “a sense heated exaggeration, suspiciousness, and conspiratorial fantasy” among small but vocal groups of the electorate. Hofstadter famously adhered to deeply progressive political beliefs, and the immediate target of his essay was a flurry of conspiratorial movements operating in his own day – McCarthyism, the John Birch Society, and even elements of the Goldwater campaign.

Despite these examples, Hofstadter conceded that this “style of mind” involved a character that was “far from new and that is not necessarily right-wing.” It had antecedents throughout American political history on the right and left, and its patterns reflected a certain type of paranoid approach to political analysis rather than any one ideological perspective. Hofstadter’s paranoiac had distinct traits, summarized in the following excerpt:

The paranoid spokesman sees the fate of conspiracy in apocalyptic terms—he traffics in the birth and death of whole worlds, whole political orders, whole systems of human values. He is always manning the barricades of civilization. He constantly lives at a turning point.

As a member of the avant-garde who is capable of perceiving the conspiracy before it is fully obvious to an as yet unaroused public, the paranoid is a militant leader. He does not see social conflict as something to be mediated and compromised, in the manner of the working politician. Since what is at stake is always a conflict between absolute good and absolute evil, what is necessary is not compromise but the will to fight things out to a finish. Since the enemy is thought of as being totally evil and totally unappeasable, he must be totally eliminated—if not from the world, at least from the theatre of operations to which the paranoid directs his attention. This demand for total triumph leads to the formulation of hopelessly unrealistic goals, and since these goals are not even remotely attainable, failure constantly heightens the paranoid’s sense of frustration. Even partial success leaves him with the same feeling of powerlessness with which he began, and this in turn only strengthens his awareness of the vast and terrifying quality of the enemy he opposes.

The enemy is clearly delineated: he is a perfect model of malice, a kind of amoral superman—sinister, ubiquitous, powerful, cruel, sensual, luxury-loving. Unlike the rest of us, the enemy is not caught in the toils of the vast mechanism of history, himself a victim of his past, his desires, his limitations. He wills, indeed he manufactures, the mechanism of history, or tries to deflect the normal course of history in an evil way. He makes crises, starts runs on banks, causes depressions, manufactures disasters, and then enjoys and profits from the misery he has produced. The paranoid’s interpretation of history is distinctly personal: decisive events are not taken as part of the stream of history, but as the consequences of someone’s will. Very often the enemy is held to possess some especially effective source of power: he controls the press; he has unlimited funds; he has a new secret for influencing the mind (brainwashing); he has a special technique for seduction.

We live in a similarly paranoid time, owing no small part to the political insanities of the day – be it the 2016 election, the current president’s twitter feed, or the explosion of illiberal and anti-speech protests on campus.

I did not vote in the last election for reasons I have explained elsewhere and I have little interest in the White House save for deriving occasional entertainment from the absurdities of its self-marginalization. The anti-speech movement on campus is another matter though. It affects the scholarly environment of my own chosen career path, including my ability to research and investigate controversial subject matters that run counter to conventional political wisdom on inequality, on higher education, and a host of other topics.

When encountering the ravings of these illiberal activists, it is useful to recall Hofstadter’s diagnosis. Modern paranoiacs abound in academia.

They include the paranoid militants who see conspiracies of “neoliberalism” lurking behind every corner of the university. Their ranks are flush with student and faculty activists who openly eschew the norms of free discussion and mediation as a means of addressing social conflict, instead preferring to block, silence, and stamp out dissenting scholarly viewpoints. They see conscientious disagreement with their own beliefs as a malicious evil, and assign it that designation as a shallow pretext to violently assault their opponents. They demand viewpoint uniformity from entire academic disciplines and often seek to remove other voices from the theatre of their operations, the university. They indulge fantastical visions of the university system, and rage in frustration and fury at the tiniest of unintentional perceived slights, even when evidence of a claimed occurrence is spotty at best. They situate themselves within one of the most ideologically skewed institutions of our society, and yet remain entirely dissatisfied by what they claim is its insufficiently “activist” disposition. The academic marxiness of certain disciplines, including those in the humanities that seem to take aggressively ideological positions on practically every conceivable topic of social science that arises from beyond their own professional competencies, is not enough to satiate the complaint.  Entire areas of academic study that merely sit on the center-left are denounced for being insufficiently subservient to the pseudoscholarly wasteland of Critical Theory. And those areas of study that exhibit actual intellectual diversity are said to be infested with greed and therefore, presumably, outright evil.

These modern paranoiacs advance elaborate mythologies about the imperiled state of their own academic corners, even though a mountain of empirical evidence shows they are actually expanding in size. They see a world full of sinister villains: dehumanized faculty who are the dupes of malicious forces and “Dark Money” from the Koch brothers, faceless administrators who are supposedly driven by schemes of “corporatization”  to seek out “profits” through some mysterious mechanism that is never adequately explained, and, lurking behind it all, an “exploitative” planet-hating, global warming-causing, capitalist economic order that feeds itself through insatiable consumption of university resources that belong, by right, to postmodernist faculty in the English department. Above all else, the paranoiacs are the victims in their own minds – victims of “privilege” and other conceptual claims of oppression that they can barely articulate, victims of any and all acts of free speech that they find personally disagreeable, victims of their own employment status as envisioned through offensively hyperbolic self-comparisons to past atrocities, and even victims of being impeded from inflicting violence upon people they dislike.

The paranoid style that Hofstadter diagnosed half a century ago is still with us today and, in some quarters of academia, it is thriving. 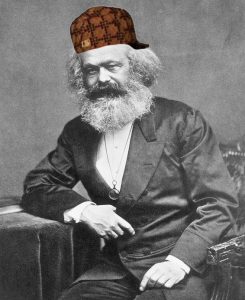