“Motion 2: To freeze current hiring by the Eudaimonia Institute, and cancel any internal (e.g. Eudaimonia conference) or external presentations related to the IE, and to restrict publication of material from EI until the COI committee is established and the University COI policy can be applied.”

For the sake of academic freedom, the Faculty Senate fortunately has no enforcement power to carry out this resolution. It is nonetheless difficult to imagine a more direct assault than this measure against the Eudaimonia Institute, a free-market aligned scholarly institute comprised of an interdisciplinary group of Wake Forest faculty members. The resolution openly seeks the power to censor these faculty members’ ability to publish their own scholarly work, to host lectures and events, and to even make hiring decisions for their own personnel. Two other concurrently adopted resolutions from the same meeting seek to subject the Eudaimonia Institute to an oversight review board, and to suspend its funding. These too are, fortunately, non-binding.

The motive for this assault upon the basic rights of faculty to conduct research free of censorship and intimidation is equally chilling. The Faculty Senate committee that drafted the resolutions did so out of political opposition to one of the Eudaimonia Institute’s main donors, the Charles Koch Foundation. They believe the Koch Foundation’s free-market political beliefs are objectionable and wish to see them excluded from campus, so they set out to persecute a group of faculty who receive Koch funding. Despite the committee’s claim that it is simply seeking to investigate “conflicts of interest” posed by private donors irrespective of their politics, note that no similar objections have been raised about the activities or donors of a multitude of left-leaning institutes at Wake Forest, including two that openly engage in political activism for progressive causes: the Anna Julia Cooper Center for Social Justice and the Pro Humanitate Institute, a project of former MSNBC pundit Melissa Harris-Perry.

The Koch Foundation is a major financial supporter of classical liberal scholarly endeavors in the Untied States. It funds faculty and research centers at hundreds of universities and provides resources for research projects, student scholarships, and speaker events. The majority sustains research on free-market economics, though they’ve also funded several million dollars in scholarships for students from historically disadvantaged and minority groups. (Full disclosure: my own university and institution have similarly benefited from the Koch Foundation’s academic support, and I’m proud that they consider my own research to be worthy of support. I’m also proud to report that they’ve never once tried to influence the findings of anything I’ve ever written, despite conspiratorial insinuations otherwise by a number of madjunct activists). This funding is nonetheless seen as unacceptable by the numerous partisans of ideological orthodoxy who inhabit higher education. Even though the Koch Foundation represents a tiny fraction of a percent of the total research funding in higher education, with much larger shares coming from progressive left-leaning foundations and deeply politicized government sources and even though free-market and classical liberal faculty are a distinct minority in left-leaning academia, their very existence is deemed intolerable by the illiberal elements campus left.

…which brings us back to the events at Wake Forest. Here a number of faculty have decided that their own colleagues should not be permitted to conduct research on perfectly mainstream economic and philosophical topics because it conflicts with progressive political ideology. These faculty have therefore set out to sabotage their colleagues’ funding and censor their work. Last week’s resolutions came about as a product of an anti-Koch petition circulated last semester among some Wake Forest faculty members. The breakdown of signers by discipline displays a familiar pattern. Most signers come from the humanities and social sciences, STEM disciplines are comparatively rare, and – as always – the English Department was the the main instigator:

We’ve seen multiple examples of this exact same pattern in recent controversies over academic freedom, including the events a month ago at Middlebury College in Vermont where a faculty-fomented protest resulted in a violent attack upon speaker Charles Murray and another faculty member. That protest also involved a widely circulated faculty petition denouncing Murray’s talk. It too was dominated by the humanities, with a group of English and MLA department faculty leading the pack.

In pointing this out, please note that I am in no way making a gratuitous attack upon English as a discipline. English has an important place in a well rounded liberal education. We should actually be deeply alarmed though by the politicization of English faculty (as well as the other humanities at large). Their involvement in these blatant attempts to silence dissenting political views on campus is quickly becoming a recurring pattern. It also stands in stark contrast with STEM faculty and the quantitative social sciences, who lend comparatively fewer faculty supporters to campus illiberalism.

This is not without reason. As a recent article in the American Interest magazine showed, university faculty have become more politicized over the past 25 years even though the American public at large has maintained a relatively stable left/right split. More startling though, the most pronounced politicization has taken place in a few disciplines that are now overwhelmingly skewed toward the political left. English is, unambiguously, the most skewed discipline, with over 80% of its faculty self-identifying on the political left according to the most recent UCLA Higher Education Research Institute survey. 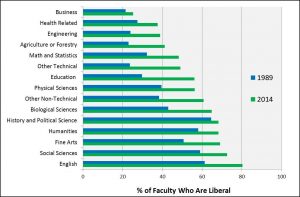 Faculty political biases come with the territory of academia, and are not objectionable in themselves as they represent a direct product of freedom of thought and freedom of inquiry. A problem emerges though when certain fields skew so heavily to one side that they effectively shut out viewpoints that dissent from a prevailing political orthodoxy. The chart above suggests we have surpassed that point in English, and that several of the humanities are not far behind. More alarming though is the correlation revealed with the petitions at Wake Forest,  Middlebury, and other campuses where political disagreements have resulted in threats to academic freedom. The most aggressively left-leaning fields like English/MLA and the other humanities also seem to dominate faculty petitions that actively call for the suppression of dissenting viewpoints on campus. It is increasingly apparent that the two patterns – progressive ideological homogeneity within a discipline and support for restricting the academic freedom of right-leaning faculty, speakers, and students – are closely related.