Thomas Piketty is back in the news again with a strange new political op-ed espousing the presidential candidacy of Bernie Sanders. As with most things Piketty, his end game in backing Sanders comes down to higher taxes. Sanders has pledged to raise income tax rates on the upper brackets, so Piketty has accordingly attempted to backfill the case for doing so with a false historical narrative.

The story he tells is a familiar feature of his “wealth tax” argument. Piketty basically blames an alleged “rise” in wealth inequality (a rise that he largely manufactured through data manipulation in his book Capital in the 21st Century) upon a succession of tax cuts beginning in 1981 after the election of Ronald Reagan. As he states it in the new editorial:

“The culmination of this new program was the tax reform of 1986, which ended half a century of a progressive tax system and lowered the rate applicable to the highest incomes to 28%.

Democrats never truly challenged this choice in the Clinton (1992-2000) and Obama (2008-2016) years, which stabilized the taxation rate at around 40% (two times lower than the average level for the period 1930 to 1980). This triggered an explosion of inequality coupled with incredibly high salaries for those who could get them, as well as a stagnation of revenues for most of America”

While the Reagan era tax cuts did indeed cut top rates from Piketty-esque levels that, at various times in the mid 20th century, exceeded 90%, the rest of this claim is built on a falsehood. Contrary to Piketty’s repeated assertions, the federal income tax system has actually gotten significantly more progressive since 1980.

Overall tax progressivity is can be complicated to measure, and multiple tools are usually enlisted by economists to track the burdens of the tax system over time. One thing is certain though – Piketty’s way of measuring it, which seems to consist of little more than noting that the top tax rate was cut, is not an appropriate indicator to measure what he claims. As Joel Slemrod notes in this helpful article on progressive taxation, “statutory tax rates misrepresent true progressivity.” One of the main reasons this occurs is that they apply to a tax base that is much smaller than total income earnings due to the vast assortment of deductions and other adjustments in the tax code. As Slemrod notes, “Since the erosion of the tax base was more pronounced for upper-income taxpayers prior to the 1986 tax act, the tax system was much less progressive than the old tax rates implied, and possibly not progressive at all.”

Turning to empirical measures, we can actually see direct evidence of increasing tax progressivity over the past 30 years. The first hint may be found in the distribution of the tax burden, which has increasingly fallen on the top 1% of income tax filers. As the chart below shows, the burden on the top 1% has skyrocketed from less than 20% in 1980 to almost 40% today. While the Congressional Budget Office only publishes data on the top 1% back to 1979, we may also supplement this with another series for the top 0.5% of income tax filers going back to the 1960s. As may be plainly seen, the income tax burden on the highest earners was actually low and stable before taking off in the Reagan years and continuing to rise until the present day. 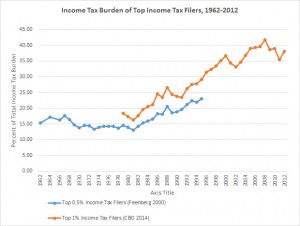 Piketty would no doubt attribute this phenomenon to an accompanying rise in the top 1% of income shares, and has produced (and subsequently moderated, at least in one recent addendum) a number of studies purporting to illustrate this phenomenon since the early 1980s. Even if we allow a generous increase in income inequality though for the sake of argument, this growth would only keep pace with the explosion that has been taking place at the top 1% of the income tax burden. So Piketty’s claim of an actual decline in tax progressivity is still nowhere to be found.

The distribution of the tax burden is not our only indicator of increasing progressivity in the income tax system though. The CBO also measures tax progressivity by indexing it to the Gini coefficient, which shows income inequality for the U.S. According to a CBO report covering 1979 to 2008, two different Gini-indexed measures (the solid dark blue lines on the graphs below) show a clear increase in the progressivity of the income tax since 1980. 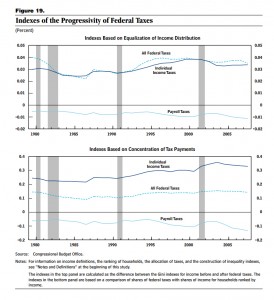 As with similar false histories found in his book, Piketty’s claim about declining progressivity in the U.S. income tax system is at direct odds with reality. Tax progressivity is actually up since the Reagan years – a combination of the reduction and elimination of federal income taxes on the lowest income earners and a consolidation of the income tax’s burdens around middle-to-upper class filers, albeit at lower top marginal rates with fewer tax-shifting loopholes in play. Like many of Piketty’s other forays into economic history, the actual trends are exactly opposite of his ideologically-tinged claims