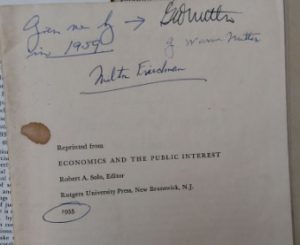 In my last several posts on the Virginia School of public choice economics, I’ve explored the background of a 1959 article on school choice by Warren Nutter and James M. Buchanan (hereafter referred to as N-B 1959) that’s at the center of the controversy surrounding Democracy in Chains. Today I want to take a look at the timeline for the article itself, as it is in clear tension with another of Nancy MacLean’s claims about Buchanan.

To briefly recap, MacLean presents the article, N-B 1959, as Exhibit A in her attempt to link Buchanan and Nutter to the pro-segregation “massive resistance” movement in Virginia. MacLean claims that by advocating school vouchers, Buchanan forged an unholy alliance of sorts with the “massive resisters” of Harry Flood Byrd, Sr.’s political machine to thwart court-ordered integration of Virginia’s schools. She also specifically claims that the article, N-B 1959, gained an important enthusiast in the form of James J. Kilpatrick, the Byrd-supporting, Calhoun-touting segregationist editor of the Richmond News-Leader. In MacLean’s telling, Kilpatrick becomes a key link between Buchanan and Byrd in the immediate political environment of 1959 Virginia, as well as a larger intellectual link that supposedly establishes Calhoun’s place as the “intellectual lodestar” of public choice theory.

Let’s also review as well what I’ve already established on this subject in prior posts:

When evaluating these claims it is important to note that the politics of Virginia’s newspapers in this era were extremely complex. Kilpatrick’s News-Leader adopted a militantly pro-segregation stance that even invoked Calhoun’s concepts of interposition and nullification as strategies to resist desegregation. Dabney’s Times-Dispatch is a more nuanced story. Dabney had a longstanding reputation as a supporter of civil rights and had editorialized in favor of integration of Richmond’s bus system. He personally adopted a moderate stance on school desegregation that favored limited and gradual introduction of black students into white-majority schools. But he was also restricted by the newspaper’s owner from editorializing against the Byrd machine (Dabney explained in several interviews later in life that he wanted to take a stronger critical stance on “massive resistance” but had been limited in doing so by his publisher). While far from integrationist, the Times-Dispatch was clearly the more moderate newspaper in Richmond and thus an important venue choice for printing N-B 1959.

But what about MacLean’s narrative linking Buchanan to Kilpatrick? We can actually put that to rest by recounting the timeline of N-B 1959:

I’ve found no evidence that the legislature took notice of N-B 1959 or utilized it in crafting policy. In fact, Nutter and Buchanan essentially predicted it would be ignored due to the low esteem they held for the state’s politicians (again, this is noted in the cover letter that MacLean misrepresented). But there’s also another conspicuous absence from this entire chain of events: James J. Kilpatrick.

It just so happens that we can also rule out any coordination with Kilpatrick from surviving letters in his papers at the University of Virginia.

Recall that Nutter and Buchanan publicly released their paper on April 1, 1959 as per Friedman’s suggestion. They mailed out copies to several figures who were involved in all sides of the debate. For example, Francis P. Miller – the leader of the anti-Byrd “liberal” wing of Virginia’s Democratic Party – received a copy. Miller was a moderate integrationist based in Charlottesville and, though skeptical of vouchers, had been involved in the local debate over whether to include them in the revisions to Virginia’s school system that were underway.

Another recipient of N-B 1959 was Leon S. Dure, a retired newspaperman in Charlottesville who had taken up the cause of school choice. Nutter also provided Dure with a copy of Milton Friedman’s famous 1955 paper on vouchers at the same time (pictured above. Dure also went on to describe Friedman as an “ardent integrationist” in several letters and documents after reading the pamphlet).

Dure is a complicated figure who will warrant more attention in  a later post. But briefly, he can be thought of as a sort of a bridge figure who worked between the moderate ends of the integrationist and segregationist factions of the political scene at the time (Dure actually started out in the mid 1950s as a moderate segregationist who was nonetheless skeptical of interposition and “massive resistance” and migrated to supporting gradual integration).

Dure is also identified as a key figure for the “moderates” in the 1959 session by James Hershman (MacLean’s brief discussion of Dure, by contrasts, strongly implies that he’s closer to the “massive resistance” camp even though she claims Hershman is her source on the Virginia school desegregation fight). He was one of the influences that prompted Gov. Almond to break with the “massive resisters” of the Byrd machine during the Perrow Commission hearings, nudging the state government slightly but importantly away from hardline segregationism. Dure was primarily a voucher advocate and worked with all parties he thought he could convince, sometimes with greater success than in others. He lobbied Almond and Perrow aggressively to moderate their former “massive resistance” stance. But he was also a close friend of Francis P. Miller, leader of the state’s liberal Democrats and the anti-Byrd faction, and tried to convince Miller to adopt the voucher program from an integrationist perspective.

Notably, Dure’s version of a voucher scheme long predated the N-B 1959 paper. Dure’s own proposal was actually devised as an attempted constitutional argument with the input of several other academics, none of whom were Buchanan or Nutter. The actual academic influences on Dure were almost all law professors. He worked closely in planning his legislative testimony in the Spring of 1959 with UVA Law School dean F.D.G. Ribble and professor Hardy Dillard, and developed his arguments over the years through an extended correspondence with former Justice Department attorney and Columbia University professor Herbert Wechsler (perhaps best known today as a mentor of Supreme Court Justice Ruth Bader Ginsberg). Dure also submitted an advance copy of his testimony to the liberal Democrat leader Francis P. Miller for comments and review. All of this appears to have taken place in January-March 1959 before Dure even knew of N-B 1959’s existence.

Buchanan and Nutter appear to have entered Dure’s line of vision as almost an afterthought to his earlier testimony, albeit one that he welcomed as another voice in favor of vouchers from another perspective that he had not considered. The two economists were making an economic argument based on Friedman’s work and had little connection to the legal world’s interpretations of case law. But Dure did find enough agreement with the N-B 1959 paper that he started appending it onto his own arguments as the additional “economic case” for vouchers. Buchanan and Nutter also briefly discussed the economic implications of Dure’s plan (at the time before the Perrow Commission) in the paper. Due to this overlap of analysis, they sent Dure a copy on April 1 when they decided to publicly release it.

Dure was also a prolific writer of letters to the editor and heavily employed these means during the Perrow Commission hearings to promote his position of pairing a state government retreat from “massive resistance” with gradual integration by way of a voucher system. When he read the N-B 1959 paper, he similarly fired off another round of letters to the editor to tout the findings of the study in relation to the oft-expressed concern that vouchers would undermine the finances of public education. To allay this concern, Dure pointed to “an economic study of ‘freedom of choice’ just prepared by James M. Buchanan and G. Warren Nutter, professors of the University of Virginia Department of Economics.” One of Dure’s letters went to James J. Kilpatrick of the News-Leader (he ran it in the April 9 issue, but it was likely sent about a week prior based on the date Dure received a copy of the report).

But Dure’s letter also establishes something else about Kilpatrick, because Kilpatrick responded to Dure with a private letter of his own on April 6 (located in the Leon Dure papers at UVA). Kilpatrick’s reply indicates that he had not yet seen the “Buchnan Study” (sic) as of this late date – he said he’d “keep on the lookout” for it.

Subsequent issues of the News-Leader in the following weeks do not appear to contain any references to the N-B 1959 paper aside from Dure, and Kilpatrick does not appear to have corresponded with Nutter or Buchanan about its contents. So it appears that he either did not receive it, or ignored it.

Dabney’s newspaper would run the N-B 1959 paper in the Times-Dispatch of April 12, just six days later. As we may see by simply looking at the timeline above, the April 6 date basically excludes Kilpatrick from the chain of the article’s dissemination until only a few days before it appeared in print. That simple fact of the timeline places a severe damper on MacLean’s unfounded claim that N-B 1959 was stealthily informing Kilpatrick’s segregationist editorials, or her strong insinuation that Buchanan and Nutter were secretly coordinating the article behind the scenes with Kilpatrick and the “massive resisters.”