My other posts on the National Book Award-nominated Democracy in Chains have focused upon severe problems with its author’s historical account, including the misuse and misrepresentation of archival evidence. Today I want to look at another aspect of the book – its own origin story, as told by author Nancy MacLean.

The book’s publicist has made exhaustive use of this story to heighten the intrigue around its contents, as has MacLean herself. For example, Duke University’s media office published a lengthy feature entitled “cracking the code” that recounts how MacLean supposedly came to this line of research.

Briefly stated, MacLean claims she set out to write a book on school desegregation in Virginia after reading about the infamous closing of Prince Edward County’s public schools in 1959 to prevent the enrollment of black students. According to the Duke article, “As MacLean dug into that story, she spotted Buchanan in a footnote to a 1959 report” – the article he wrote about school vouchers along with colleague Warren Nutter. The rest of MacLean’s tale follows directly from this purported discovery. She claims she then looked into this footnote and uncovered evidence of something nefarious. She claims she discovered that the two libertarian economists, while not exactly racists themselves, had forged an unholy alliance with Virginia’s segregationist “massive resisters” in order to advance the scheme of school privatization. From this simple footnote, Democracy in Chains was allegedly born.

Let’s investigate the story a little further. MacLean repeats a version of it in the acknowledgments section of her book where she says her inquiry into Buchanan began. Here she credits the “footnote” that tipped her off to the entire conspiracy to an earlier work on Virginia’s desegregation crisis by James H. Hershman: 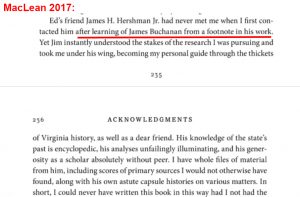 This reference points to Hershman’s chapter in an edited volume on Virginia school desegregation from 1998 by Matthew Lassiter and Andrew Lewis, The Moderates’ Dilemma. The Nutter-Buchanan school voucher article from 1959 is indeed cited in a footnote to this chapter, although Hershman describes it in greater detail in the body of the text. This excerpt may be seen below: 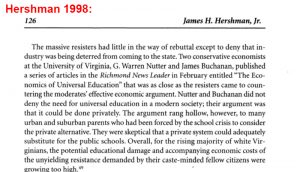 Let’s pause and note a couple of features of the 1998 Hershman article that are directly pertinent to the MacLean story. First, Hershman places Nutter and Buchanan squarely in the camp of the segregationist “massive resisters.” He describes their article as being “as close as the resisters came to countering the moderates” arguments against school privatization. (Those who have read the 1959 article know that it does not actually advocate the positions Hershman and MacLean ascribe to it, but they proceed from that misreading nonetheless).

Second, and equally significant, is that Hershman then claims Nutter and Buchanan published the paper in the Richmond News-Leader, the militant segregationist house organ edited by James Jackson Kilpatrick. This connection is important because Kilpatrick becomes MacLean’s key link between Buchanan and the “massive resisters” in her own account. As MacLean admits, she has no evidence directly tying Buchanan or Nutter to the segregationist political machine of Harry Flood Byrd, Sr. Instead she gets there through the supposed Kilpatrick connection, which as we’ve now seen comes from Hershman in the passage above.

As readers of my previous posts on this subject know, MacLean erred in trying to forge a link between Kilpatrick and Buchanan. There’s very little evidence that the two men had any substantive interactions, and none related to segregation or the schools crisis. By contrast, there’s ample evidence that Nutter and Buchanan were actually working with Virginius Dabney, the moderately pro-integration editor of the Richmond Times-Dispatch. Dabney was a personal friend of Nutter, was involved in the economists research center at the University of Virginia, and actually published the school choice paper in two installments on April 12-13, 1959. In other words, the erroneous connection to Kilpatrick likely originated with Hershman’s 1998 article.

So why did Hershman associate the Nutter-Buchanan article with the segregationist Richmond News-Leader instead of its actual publication place, Dabney’s Times-Dispatch? The answer is likely a simple inadvertent swapping of citations. Hershman’s 1998 chapter was based on his 1977 doctoral thesis at the University of Virginia on the same subject. The Nutter-Buchanan article also appears there, but without the error: 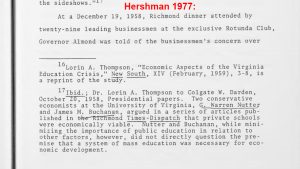 Note that the 1977 version (which actually appears in a footnote) contains two important differences with the later 1998 version. First, Hershman does not characterized Nutter and Buchanan as being aligned with the segregationist “massive resisters” in 1977. This addition is made in the 1998 article. Second, Hershman’s dissertation correctly identified the Richmond Times-Dispatch as the place of publication – not the News-Leader. At some point in between his 1977 dissertation and the 1998 article, Hershman inadvertently switched the newspapers.

MacLean took the implications of that error and ran with them to fantastical lengths, writing Kilpatrick into the story as a crucial link between Buchanan and the segregationist Byrd machine. She devotes substantial attention to Kilpatrick in her text, making sure to highlight his pro-segregation writing and his interests in the political theories of John C. Calhoun. She also wildly speculates that Nutter and Buchanan were coordinating their paper’s release behind the scenes with Kilpatrick and attempts to divine commonalities between it and editorials that Kilpatrick wrote for the News-Leader.

There’s one more twist though. At some point while writing her book, MacLean apparently realized that the Nutter-Buchanan article actually appeared in the Times-Dispatch and properly cited it to the correct newspaper. Despite catching this citation error though, she retained the purported link between Buchanan and Kilpatrick anyway. She wrote her entire chapter as if the Hershman error from 1998 was accurate and presented Buchanan as an ally of the “massive resisters” even though she had no evidence for that claim.

MacLean never even bothered to investigate the article’s actual route to publication through Dabney. But Dabney, who won the 1948 Pulitzer Prize for editorializing against poll taxes and bus segregation in Richmond, does not allow the same salacious charges and insinuations that MacLean extracts from Kilpatrick. MacLean therefore retained an erroneous historical interpretation premised on Hershman’s switching of the papers, even though she had sufficient information to correct that error.

So there you have it. A finalist for the 2017 National Book Award appears to have been built upon a typo.