Counting adjunct faculty is a strangely politicized topic, replete with bad information and even outright false statistical claims. Media reporting of the subject routinely repeats the false claim that adjuncts make up about three fourths of the academic workforce. Adjunct activist organizations such as the “New Faculty Majority” even incorporate this claim into their name. Yet as I have documented on this blog and elsewhere, the stats behind this claim simply do not add up.

We also know for a fact that the adjunct job market is heavily distorted by the for-profit higher ed sector, which almost exclusively draws from part-time faculty. My article in the most recent issue of Liberal Education documents this phenomenon and illustrates some of the nuances beneath the surface of the adjunct numbers.

One request I often receive is for an accounting of how many adjunct faculty teach at traditional not-for-profit institutions. Owing to data limitations in the way that adjunct numbers are tracked and reported, it is difficult to arrive at a precise estimate. We can however see the results of the for-profit distortion by removing these numbers from the historical trend in adjunct hiring. An estimate of this pattern without the for-profit effect is overlaid in the dotted red line below. As it shows, adjunct growth – though existent – is far more stable without the for-profit effect, and actually does not appear to be growing much faster than the ranks of full-time faculty in recent years. 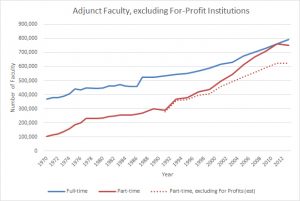 There are still some data issues to work through though. The U.S. Department of Education tracks its adjunct data through self-reported surveys from higher ed institutions. While adjunct activists have long charged that these surveys “under-report” the total number of part-time employees, the opposite is actually true – at least in aggregate. The most thorough survey data on the adjunct workforce indicates that about 22% of current part-time instructors teach at two or more institutions. That means the Department of Education numbers are likely double-counting a sizable subset of the adjunct ranks. We don’t know exactly how many are double counted due to data limitations. Some of these persons teach at 3 institutions and are therefore triple-counted. Even if we err on the conservative side though, the Department of Education numbers are probably at least 122% of the actual adjunct population.

A little math gets us to a rough but reasonably accurate estimate of how many adjuncts are currently teaching in not-for-profit higher ed, a figure that includes community college and 4-year institutions. By dropping the for-profit workforce, the total number of not-for-profit adjuncts reported to the Department of Education sits at around 625,000. Since this figure includes a the aforementioned double-counting problem, it needs to be further discounted. That brings us to about 512,000 adjuncts on a conservative reduction. But since triple counting also exists, actual numbers are likely below 500,000.

By contrast, these same institutions currently employ about 800,000 full time faculty. The claimed “new faculty majority” isn’t anywhere close to a majority after all.