Historian Allen C. Guelzo, with whom I have tangled repeatedly on the subject of Abraham Lincoln and colonization, inserted another jab at my 2011 book Colonization after Emancipation (co-authored with Sebastian Page) in the latest issue of the American Historical Review. This one appears as a comment in his review of Robert E. May’s book Slavery, Race, and Conquest in the American Tropics. I’ll excerpt the relevant portion below, along with a challenge: can you spot an immediate problem with Guelzo’s critique?

And he adds at the end of the book an exceptionally well-argued chapter on Lincoln and colonization, which stands in striking contrast to the more recent (and sensationalistic) version of Lincoln’s colonization interests promoted by Philip W. Magness and Sebastian N. Page in Colonization after Emancipation: Lincoln and the Movement for Black Resettlement (2011). Without rose-tinting Lincoln’s colonization impulses, May insists that Lincoln’s promotion of colonization was instrumental in nature, designed to soothe “white America’s racial paranoia” about emancipation with the sugarcoating of a promise that somehow freed slaves would not be allowed to swamp the white northern working class. Far more generous in his view of Lincoln’s motivations than Magness and Page, May asserts that Lincoln, in an age when global mobility of populations was at its height, had convinced himself that colonization might actually provide greater freedom for “the lives of its black participants” while at the same time “extending freedom in the hemisphere” (p. 273).”

Since the challenge was to spot the problem, scroll past the following for the answer.

If you did not catch it, pay close attention to the publication date of May’s work – 2013.

In describing its “striking contrast” to “the more recent (and sensationalistic) version” found in my 2011 book, Guelzo appears to have supplied us with an unintentional reminder of how getting one’s timeline right is an important feature of the historian’s craft.

Textual games aside though, this latest line of attack is a very strange one for Guelzo to take. The “striking contrast” he claims to find is actually belied by the fact that May extensively cites and draws upon my research in the very same chapter. In addition to missing these footnotes, Guelzo appears not to notice that May’s take on colonization is at odds with his own interpretation of the same issue.

As readers of my blog likely recall, my dispute with Guelzo traces to an attack he made upon my work in the Winter 2013 issue of the Journal of the Abraham Lincoln Association where he challenged the existence of a key document in which Lincoln signed off on a previously-unknown colonization venture in British Honduras, or modern day Belize. The document is significant as it is dated June 13, 1863, placing it several months after Lincoln is commonly supposed (albeit without evidence) to have shifted away from colonization with the issuance of the Emancipation Proclamation. Guelzo vigorously contested this document’s authenticity, blustering that it “is not a Lincoln document,” that “Magness and Page supply [Lincoln’s] endorsement by citing the report of one of the British Honduras agents,” that “It accomplishes exactly nothing to cite documents that do not exist,” and – in perhaps his most serious and unprofessional charge – that we had engaged in the “liberty of manufacture” in its production.

Guelzo’s charge was and remains utter nonsense of course. The document certainly exists, with at least 5 separate copies – all showing Lincoln’s endorsement – having been distributed across the British Empire after it was delivered to British authorities. Here’s a photograph of one of them for reference: 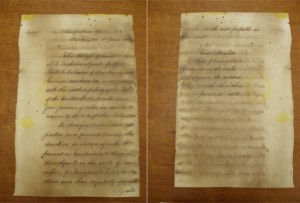 What’s particularly interesting about the AHR review however is that, in striking contrast to Allen C. Guelzo, Robert E. May accepts this discovery and includes it in his discussion of the British Honduras project:

“On June 13 [1863] Lincoln endorsed [James] Mitchell’s permission to Hodge and his associate S.R. Dickson for unobstructed “canvassing for emigrants” and Mitchell’s request that U.S. officials assist them in their quest.” (May 2013, p. 269)

Far from echoing the tension claimed by Guelzo, I actually found May’s book to be highly complementary to my own interpretation of the colonization evidence around Lincoln and indicated as much in a positive review that I wrote of Slavery, Race, and Conquest of the Tropics last January (located here). As Guelzo again demonstrates with his own comments, a significant subset of Lincoln scholars are still wedded to an assortment of “lullaby” theories about Lincoln using colonization to “soothe” or “sugarcoat” emancipation. In contrast, May actively engages the new evidence and methodically considers the possibility that Lincoln continued his colonizationist pursuits until very close to the end of his presidency and life. Whereas Guelzo could only gripe in mixed metaphor that I had “exhume[d]” Benjamin F. Butler from “the Civil War’s historical drunk tank” to prop up Lincoln’s colonization interests in 1865, May is also willing to follow the Butler evidence where it leads and consider the implications. As he writes:

“Recent detective work by historian Phillip Magness, however, discredits claims that Butler could not have met with Lincoln in early 1865 since the chronology Butler gave for their meeting is inconsistent with Lincoln’s whereabouts at the time. Magness demonstrates the two men did meet at the White House on April 11, three days before Lincoln’s assassination.

If Butler even remotely captured the essence of Lincoln’s remarks, Lincoln remained reluctant to surrender colonization to his death.” (May 2013, p. 271)

My argument on the Butler testimony is available at this link. And while I won’t venture any speculation on whether May finds the essence of Lincoln’s remarks accurately captured by Butler, it is fair to note that this passage stands in striking contrast to the more recent (and chronologically confused) synopsis that Guelzo has offered.