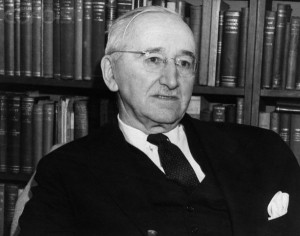 This morning I came across the following passage from an article that F.A. Hayek published in 1956, entitled “Progressive Taxation Reconsidered.” Their content struck me as particularly prescient, as they directly anticipated both the punitive dimensions of Piketty’s wealth tax proposal, and the vulnerability of progressive income taxation to political capture. As Hayek writes:

“With scales of progression approaching and even exceeding ninety per cent of income their significance is of an altogether different nature from what it was when the upper limits were in the region of ten or at most fifteen per cent. This seemed to be the extreme figures which had to be seriously considered when, around the beginning of this century, the whole issue was for the last time thoroughly discussed. It was then still possible to treat the whole issue as if it were a problem of allocating a given tax burden among the various classes of society; and though it did raise important issues of principle if the comparatively wealthy were made to contribute a few per cent more of their income, no important economic effects were expected from this. To suggest at that time that progression might ever be carried to the figures it has now reached would have been treated by its advocates as a malicious travesty of the principle showing a disreputable contempt for the wisdom of democracy.

With the change in scale has come a general recognition of the fact that the only ground on which progressive taxation could be rationally justified was a desire to change the distribution of incomes and that this could not be based on any scientific argument but had to be recognized as frankly a political decision, an attempt to impose upon society a pattern of distribution determined by political choice. All the ingenious theories of just taxation which had been developed in the early days of the discussion and which can still be found in the textbooks on public finance have lost their relevance in view of the no longer disputed fact that present policy is guided almost exclusively by the desire to produce an all-round reduction of income inequalities.”

A little later in the same piece Hayek continues:

“It seems that the conclusion we must draw from this is that rates of taxation in the upper part of the progressive scale have very little to do with the benefit the resulting redistribution of income confers on the lower income classes or the relief in the tax burden they actually obtain. They must be regarded as purely punitive rates, as an expression of the dislike of the majority of the idea that anybody should enjoy the command of such large incomes. It is in this region, however, where marginal tax rates rise in Great Britain and the United States more or less rapidly from the neighborhood of 20 per cent (for a married couple with two children) to 90 per cent or over, that the effect of progressive taxation is so very important.”

He concludes this part of the discussion with the following warning, which seems plainly evident in the extreme prescriptive course that Piketty has taken:

“To any one who views the social process realistically it can offer little reassurance to be told that a principle which, if carried very far, is admittedly dangerous, will have only beneficial effects if used in moderation. It is, in fact, only the presumption against the principle as such which protects us against its abuse. This is particularly true where, as in the case of progressive taxation, every argument which can be advanced in favor of some progression is equally valid in favor of more progression. The idea merely points in a direction in which it is thought desirable to deviate from a standard. What at first limits it is no more than the unfamiliarity of it. But it always justifies a little more of the same than before. The principle itself indicates no halting point and the “good judgment” of the people to which its defenders are usually driven to resort as the ultimate safeguard are merely the opinions shaped by past policy. In its cumulative effects the successive decisions on what is just in the light of the principle will always go far beyond what its initial sponsors thought desirable.”