I’ve been blogging quite a bit recently about the controversies of the adjunct professor market. The topic interests me for a number of reasons. I regularly work with grad students who are on the academic career path, meaning employment concerns in a weak and increasingly adjunctified job market are a recurring theme. On a more personal level, adjuncting forms a part of my own career as I have been adjunct teaching in some form or another continuously since 2008 (the first 1.5 years were as a “full time” adjunct including no alternative or summer employment, now I simply contract to teach in another department in addition to my full time obligations at GMU). I also find it enjoyable as it lets me teach in addition to research and program administration, and it actually pays well for the work. But quite simply, the dynamics of academic employment make for a fascinating topic of study.

One theme of my previous posts on the subject is that while adjuncting will not make you wealthy, the economic difficulties of adjuncting are often severely overstated. A closer look at the empirical evidence actually bears this out. One good reference point is a 2012 survey of adjunct faculty conducted by the Coalition on the Academic Workforce. This study was highly sympathetic to adjunct faculty, and most news coverage at the time of its release pointed to it as evidence of the “dismal picture” of adjunct life. Yet if we disentangle the study further, several interesting trends become immediately apparent and shed direct light on the related issue of securing full time academic employment.

I. More than half of the adjunct survey respondents do not possess a terminal degree.

As I mentioned in my last post, a terminal degree (PhD or equivalent) is more or less required these days if one hopes to secure a full time position in academia. It is not the only thing required, but it is difficult to receive consideration for a permanent faculty position without one. At the present, a majority of adjunct survey respondents appear to lack this terminal degree. The results are in Table 9: 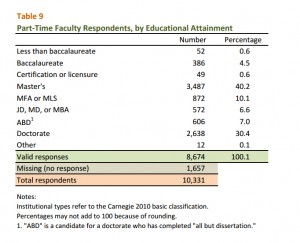 The figures are very revealing as a full 40% of respondents only have a Master’s degree, and another 5% only have a Baccalaureate degree or less. The MFA is a bit trickier as its status as a terminal degree varies by area, although a clear trend toward PhDs is becoming the norm in fine arts. But assuming half of MFAs would fall in fields that require an additional PhD to secure academic employment, and we’re already above 50% of the adjunct workforce. (Note that this does not include the segment of ABDs who have not yet completed a doctorate but teach at the adjunct level, which would push the non-terminal degree holding percentage even higher).  While many of the persons in these categories are likely perfectly content at remaining at non-terminal degree levels and others are working professionals who adjunct on the side, there still seems to be a segment of persons with non-terminal degrees who believe they can secure or should be offered full time academic employment. This expectation is entirely unrealistic in the current job market, or under any foreseeable long term trend in academic employment.

The study famously placed the median adjunct wage in the U.S. at $2,700 per class. Yet this number is also reflective of an adjunct pool where the majority of professors lack a terminal degree. Table 19 reveals the median among persons with a Master’s degree is $2,400. Yet a PhD increases that median by a third to $3,200. This may not seem like much for a single class, but for a PhD-holding adjunct teaching a 4-4 course load it’s an additional $6,400 a year. 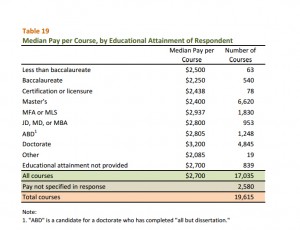 Most “beleaguered adjunct” news coverage points to the case of the so-called freeway flyer – the adjunct professor who has to commute between 2, 3, or 4 different campuses in a city to maintain a full time course load. To persons who do it, this obviously means long hours of commuting between multiple campuses in traffic, which, we are constantly reminded, come without payment (that very few other parts of the workforce pay their employees to commute is largely overlooked when making this observation). It actually turns out that the freeway flyer is a very rare phenomenon. According to Table 17, an overwhelming majority of 77.9% of adjuncts only teach at one college. An additional 17.9% split their time between two. The “freeway fliers” who commute between 3 or more institutions represent a tiny 4.2% of the adjunct workforce.

IV. Most adjuncts do not teach anywhere near a full course load.

Table 16 illustrates the breakdown by number of classes taught per semester. More than 70% of adjunct survey respondents only teach 1 or 2 classes per semester. Assuming the teacher is a reasonably competent time manager, this is the equivalent of a job that requires less than 10 hours of work a week. For an inefficient time manager, this is a job that should take no more than 20 hours a week.

The percentages decline drastically when one approaches levels that are representative of a full time work week. Less than 15% of adjunct respondents teach a 4-4 course load or higher, which would be the equivalent of a full time teaching position.

These observations are offered as a small glimpse of the adjunct employment situation as illustrated in the overall statistical picture. Exceptions undoubtedly exist for every category, and adjunct wages are indeed a very modest long term strategy for a permanent career path. But the data also reveal a more complex picture than the standard narrative of “long hours and low pay” often associated with adjuncting. Rather, a large part of the story seems to be explained by (1) a low number of overall hours worked, including at a moderately high rate of pay, combined with (2) a high percentage of unrealistic expectations of securing a full time position out of adjuncting, based on the prevalence of non-terminal degree holders.