I first became aware of Thomas Piketty’s book Capital in the 21st Century last spring, though not from the onset of “Pikettymania” amidst its skyrocketing to the top of the best seller list. Rather, a couple of faculty colleagues brought it to my attention for its data. Knowing of my own research interests in historical tax data from the turn of the century United States, they suggested it as a new and relevant contribution with a fair amount of empirical overlap with what I was doing. I began reading the book as it gained attention for other reasons – mostly its prescriptive recommendation for an intentionally punitive global tax on wealth, with rates not unlike those found in the 75% top income tax bracket that had recently been enacted in Piketty’s native France. 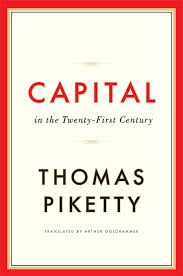 At the time, the scholarly and public buzz alike focused upon the prescriptive debate. By contrast, Piketty’s empirics were almost universally praised for their depth and rigor – even by writers who diverged from his ideologically-driven interpretations. Something of a watershed moment occurred in late May 2014 when Chris Giles of the Financial Times published a lengthy critique of Piketty’s data – data that had thus far attained almost nothing but acclaim. That is when I also returned to the book and began investigating its data presentations about the economic history of the United States. As regular readers of this blog know, several of Piketty’s claims simply did not add up.

A little over six months have passed, with a notable development in the repeal of France’s punitive wealth tax last week. Despite this new piece of empirical repudiation for a policy that is very similar to Piketty’s core prescriptive arguments, his work remains politically popular and indeed picked up a slew of year-end book prizes, including one given by the Financial Times.  Piketty’s reputation on the data front also largely withstood the Giles critique, or at least among those who were already sympathetic to his claims.

Having also weighed in on the data debate myself, I began work on a formal critique of the empirics in Capital in the 21st Century. The product – an article coauthored with Robert P. Murphy – is set to appear in a forthcoming issue of the Journal of Private Enterprise and is now available for download on the Social Science Research Network via the link at the bottom of this post.

I invite you to read the piece in full, and welcome any feedback. A few summary points are worth a brief mention though as our critique takes on several central data claims in Piketty’s work:

The resulting study does not endeavor to be a comprehensive deconstruction of Piketty’s work. Rather it is a detailed examination of several of his core empirical claims, with particular attention to how they are utilized to support his core arguments. While there is surely much more to be said on this subject, the examples highlighted in this paper include the empirical presentations behind several of Piketty’s main theoretical claims and function – in cumulative – to construct his overarching historical narrative of 20th century capitalism, and what he believes to be occurring in the present. Insofar as his empirics in these instances are riddled with error, bias, and possibly worse, it may well be the case that Piketty’s data analysis forms the weakest point of a highly touted but also highly problematic book.