Some days back I offered an interpretation of the motives and political economy behind the adoption of the 16th Amendment, noting at the time that it also caused extreme constitutional havoc by altering the relationship between the tariff system and the generation of federal tax revenue. While it is certainly possible to read this as a statement of political aversion to the modern income tax system, my characterization was actually an intended reference to certain very specific constitutional consequences of the income tax amendment that actually have little to do with any personal preferences regarding the validity of progressive income taxation.

What then was the unparalleled constitutional havoc that came about from the 16th Amendment? Let me suggest they included the following:

As I noted in my previous article, the 16th Amendment was actually adopted as a flanking move against the politically entrenched protective tariff system of the Payne-Aldrich Tariff Act of 1909. Briefly stated, the income tax’s backers believed they could undermine political support for protective tariffs by shifting the tax system away from the tariff entirely and into a new source of federal revenue. Prior to the income tax, tariffs were consistently the largest generator of federal revenue and often provided for fully half or more of the government’s entire operating expenses. This was no accident but rather a feature of constitutional design, because the taxing power found in Article I, Section 8 (along with its subsequent interpretation) made tariffs one of the main and largely unrestricted taxing tools of the federal government. Tariffs actually attained a state of de facto constitutional primacy due to custom and an 1895 Supreme Court decision that struck down a modest income tax measure. As a result they were consistently the largest category of federal tax revenue for most of the 19th century.

The problem with tariffs though is that they also serve dual purposes. In addition to raising tax revenue, they can also be hiked to punitive levels to “protect” American industries from their foreign competitors. For half a century after the Civil War, the protectionists maintained the upper hand in Congress and imposed a high, albeit far from prohibitive, protective tariff regime. This regime was also fairly stable though. Since unconstrained protectionism eventually comes at the expense of revenue, Congress could not risk pushing the tariff rates too high or else they might cut off their own tax base. The income taxers of 1909 thought they could undermine protection by decoupling it from its connection to the federal tax base, but they miscalculated. Instead they simply unchained protection from the revenue needs of the federal government, and it turned out that those needs were actually holding it back. As a result, Congress passed the Fordney-McCumber Tariff of 1922 with virtually no consideration of revenue, which now came from the vast income tax. This was followed by the even more extreme Smoot-Hawley Tariff in 1930, which deepened the Great Depression.

A reasonable case could be made that neither Fordney-McCumber nor Smoot-Hawley would have passed if the United States still depended on tariffs for most of its tax revenue. These highly protectionist measures specifically penalized international trade, and the latter led to its catastrophic collapse on a global level. A tariff-dependent constitutional order might well have continued to exhibit a protectionist flavor, but revenue needs alone would have preserved much of the international trade system from the type of punitive interference we saw in 1922 and 1930.

A strong case can be made that the 16th amendment was also directly responsible for the 18th amendment, America’s disastrous experiment with alcohol prohibition. The pre-income tax federal revenue system was not only tariff-heavy, but also dependent on alcohol sales. Imported alcohol consistently provided one of the highest-generating revenue categories on the tariff schedule, and domestically produced alcohol formed the core of the federal excise tax system. Together these two types of taxation provided more revenue than any other single category of products. At its peak in the early 1890s, alcohol consumption alone – taxed through tariffs and excises – paid for some 40% of the entire federal government’s budget. 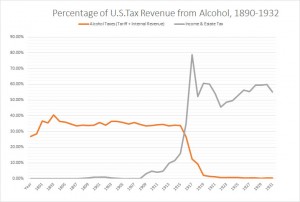 The constitutional implications for alcohol prohibition are strongunder this scenario: If Congress bans the consumption of liquor, wine, and beer it also instantaneously cuts off the largest source of federal tax revenue. The price of banning alcohol prior to the income tax was quite literally akin to chopping a third or more from federal tax income. The 16th amendment changed all this by providing an alternative source of revenue in the income tax. As a result it became politically possible to adopt prohibition – and give up the lucrative tax receipts from alcohol – without first having the income tax amendment in place.

By shifting the federal revenue system en masse to the income tax, the 16th amendment also somewhat unintentionally gave rise to a tempting tool for conducting macroeconomic fiscal policy through sweeping national changes to an income-chained tax system. Indirect taxes are relatively difficult to coordinate and reconfigure en masse, as the inner complexities of historical tariff revisions revealed. There are fewer immediate economy-wide “stimulus” options through an indirect tax system, and neither does it function well as a coordinated contractionary mechanism (though tariffs did spark panics of sort from time to time, usually unintentionally and haphazardly).

While the faults of conducting macroeconomic fiscal policy through the income tax are numerous and the criticisms of its underlying Keynesian premise is a discussion onto itself, they are also constitutionally enabled by the very existence of the income tax. As are the politics that accompany them. So the next time you see a politician of any stripe peddling changes in the income tax as the panacea to economic woes and deficits alike, you may fault the federal income tax amendment for its genesis. As a consolidated policy tool, income taxes are highly susceptible to political manipulation for short-sighted policy objectives and – worse – political favors in the form of tax exemptions and incentives for politically connected constituent interests. While such woes would not disappear in the absence of the 16th amendment, they would find fewer and less powerful avenues of manifestation at the national level.