So I have some advice for so-called reform conservatives trying to rebuild the intellectual vitality of the right: You need to start by facing up to the fact that your movement is in the grip of some uncontrollable urges. In particular, it’s addicted to inflation — not the thing itself, but the claim that runaway inflation is either happening or about to happen.

Frequenters of the Krug-o-sphere will recognize a familiar theme in this passage, namely Krugman’s recurring habit of lambasting what he sees as inflationary alarmism. Krugman usually employs this critique to dismiss criticisms of either deficit finance or expansionary monetary policies, both of which comport well with his Keynesian economic outlook and his own political preferences on matters such as federal spending.

From a historical perspective however, Krugman’s position derives from an unusual source, hence the aforementioned irony, because Krugman himself used to be a vociferous addict of “Runaway Inflation” prognosticating.

In 1982 Krugman was a somewhat younger academic economist in the employ of the Reagan Administration’s Council of Economic Advisers.  Along with future Treasury Secretary Larry Summers, he composed the following memorandum predicting an impending inflationary disaster, or ticking “inflation time bomb” that would follow on the heels of a tighter monetary policy intended to target the very same. In his 1982 memo, Krugman unequivocally offers the “conservative” prediction of adding “five percentage points to future increases in consumer prices.” 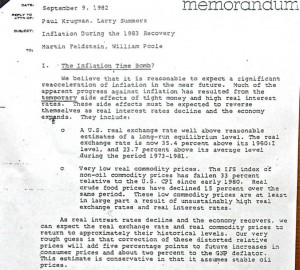 The history of this episode is recounted by Brian Domitrovic and is worth reading along with his history of the Supply Sider movement, Econoclasts. Krugman’s prediction may also be evaluated against the Consumer Price Index metric he references in the memorandum (monthly data is available at this link).

While I will defer to the economists for purposes of evaluating his present claims, the short end of it is that Krugman’s forecast seems to have been clinging to, if not completely mired in, the pre-1970s hydraulic wasteland of since-debunked Phillips Curve forecasting. That Krugman has emerged as perhaps the most vocal critic of alleged inflationary alarmism may well reflect a corrective compensation from his own alarmist past.

David Henderson provides this excellent first-hand recollection of the Krugman memo from the Council of Economic Advisers.