The Irish satirist Jonathan Swift once remarked that “Falsehood flies, and the Truth comes limping after it; so that when Men come to be undeceiv’d, it is too late; the Jest is over, and the Tale has had its Effect.” His words anticipated a common observation in scientific research wherein the time and effort that must be spent correcting a falsehood far exceeds the claim that triggered the original error. We see modern examples of this pattern with the anti-vaccination movement, homeopathic medical pseudoscience, and just about any political conspiracy theory of the moment. Fake news travels quickly and far when it has an audience craving its message, whereas correcting the record is a slow and arduous task with few immediate rewards.

On that note, I once again return to the subject of Democracy in Chains, the 2017 book by Duke professor Nancy MacLean. This book has almost single-handedly spawned a flurry of attacks and conspiracy theorizing about the late economist James M. Buchanan, including an unsettling acceptance from high ranks in the economics profession. Yet as a work of scholarship, it is almost completely wrong on major and minor points alike. Correcting these errors takes time and patience.

Today I’d like to look at one of the central arguments of MacLean’s book in its attempt to link Buchanan and his University of Virginia colleague G. Warren Nutter to the “Massive Resistance” movement against school desegregation after Brown v. Board of Education. In MacLean’s telling, Nutter and Buchanan are essentially the academic villains of the “Massive Resistance” era – a pair of economists who unscrupulously seized on the racist backlash to Brown in order to advance a libertarian school privatization scheme for ideological reasons. MacLean makes this message the central point of what is arguably the book’s most important and widely-touted chapter: 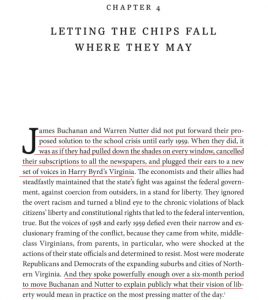 As MacLean puts it, Nutter and Buchanan are guilty not because they espoused segregation themselves but because they were negligent about a Massive Resisters ploy in 1958 that resulted in state government’s forcible shuttering of public schools facing integration orders. As the opening to MacLean’s Chapter 4 makes clear, she places Nutter and Buchanan in opposition to some of the heroes of her narrative, the moderate middle-class suburban parents of Virginia who took a stance against the school closures and the political machine of Harry Flood Byrd, Sr.

MacLean expands on this theme with specific reference to the school closures in Charlottesville, Virginia where Nutter and Buchanan lived. As she explains in a passage a few pages later:

“In Charlottesville, home to UVA, ten elementary school PTA mothers had formed the Parents’ Committee for Emergency Schooling, cobbling together temporary schooling in church basements, home family rooms, and clubhouses, so as to avoid a mass rush to private schooling. The mothers differed on some questions, one explained, “but the one point on which we all agree is balking at the idea of doing away with the public school system.” The “tense air” in town marked a change “from the usual tranquility of Albemarle County,” noted the University of Virginia student newspaper.”

Elsewhere in the chapter, and in her public talks, MacLean effusively praises this group of suburban parents for fighting back against the Massive Resisters. She cites them as examples of responsible citizens, contrasted with the claimed dereliction of Nutter and Buchanan. And she specifically credits the Charlottesville-based Parents’ Committee for Emergency Schooling (PCES) for leading the charge. A few pages later, she enlists the very same point to further bludgeon Buchanan as the foil of this school saver cause:

“Buchanan had first pitched his program to Colgate Darden as a way to push back against federal overreach in the name of liberty. But the parents’ mobilization to save the public schools had revealed harder truths. It wasn’t just the northeastern elite that rejected his vision of a free society. It was tens of thousands of white moderate citizens of the state in whose name Byrd was defying federal power.”

MacLean’s depiction of Buchanan’s role in the desegregation period is factually erroneous and historically unreliable from beginning to finish. But these specific passages are also important to note for another reason. Not only do they evince an interpretive error by MacLean, but they unintentionally reveal gross historical incompetence in her handling of the subject matter.

How so? Completely unbeknownst to MacLean, her own “villain” Warren Nutter was actually one of the founding parents of the PCES.

Nutter and his family lived in Charlottesville, and his children attended Venable Elementary School – one of the institutions that the state government forcibly closed in September 1958 to prevent its integration. As parents in his neighborhood scrambled to create makeshift classrooms for the duration of the Massive Resisters’ assault on education, the Nutters actually volunteered their home to host a class of seventh graders for the duration of the semester.

On September 24, 1958, the Washington Star ran a story on how the PCES mobilized to ensure the continuity of schooling after the Massive Resisters shut down Venable Elementary. They specifically featured the Nutter family’s efforts and interviewed Mrs. Nutter for the article. A week later, the Staunton Leader visited the temporary classroom in the basement of the Nutter home at 1860 Field Street. They recruited Mrs. James Leitch, a displaced public school teacher from Venable, to teach the class and converted picnic and ping-pong tables into desks. As they settled in for the long fight against Byrd’s school closure policy, Warren Nutter even brought home desk-chairs from the University of Virginia for the students to use. 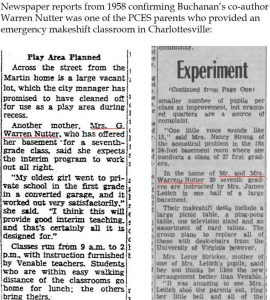 Nutter’s colleague James Buchanan did not have any children, but he too was aware of the effort of the PCES and likely approved. He mentioned it briefly in a letter to Ronald Coase, his soon-to-be UVA colleague and a future Nobel laureate (Daniel Kuehn has a short twitter post on Buchanan’s letter here). We also know from a 1960 letter that Buchanan praised the defeat of the “reactionary elements” in the state a year earlier – a clear reference to the end of the Massive Resistance school closure laws.

Since the Nutters were heavily involved in PCES and had children at Venable, they almost certainly followed the local political fights over desegregation in Charlottesville.

One of these happened the following spring after the courts ordered the reopening of Venable and the other closed schools. Local segregationists, led by school board attorney John S. Battle, Jr., waged a public campaign against school vouchers on the grounds that they would undermine his “passive resistance” scheme to thwart integration with enrollment caps. In a series of widely publicized speeches, including one at Venable, Battle claimed that vouchers would lead to the “negro engulfment” of public schools. This campaign began shortly after the Charlottesville school board met to consider Battle’s scheme on January 26, 1959, and directly coincided with the public debate over vouchers between January and April. Nutter authored his voucher article with Buchanan during this time, and published it on April 12-13 in the Richmond Times-Dispatch.

Importantly, the connection between the Nutters and Venable Elementary demonstrates their awareness of Battle’s anti-voucher segregationism, and suggests it was a likely intended target of Nutter and Buchanan when they decided to publish their article. Segregationists on the Venable PTA had a copy of one of Battle’s “negro engulfment” speeches mass-reproduced, and mailed it to every Venable parent – which would have included the Nutter family.

This entire chain of events casts Nutter’s personal stake in the school desegregation fight in a very different light than MacLean’s narrative. Indeed, the two are impossible to reconcile given that the Nutter family participated in the founding of the very same group that Democracy in Chains identifies and praises as the foil of Nutter and Buchanan’s position during the 1958-59 school crisis. In a revealing stroke of irony, it would appear that it is Nancy MacLean who “know(s) nothing about Virginia history.“