One of the stranger recent currents in historical discussions around slavery involves an increasingly common attempt by scholars and activists on the far left to enlist historical abolitionists as ideological ammunition to the causes of anti-capitalism or even socialism. A primary motivating factor appears to be the so-called “New History of Capitalism” (NHC) genre of books by Sven Beckert, Ed Baptist and others who have all advanced arguments that portray capitalism and slavery as deeply intertwined and interdependent economic systems.

The abolitionist extension of the NHC argument may be seen at several places in Manisha Sinha’s recent book The Slave’s Cause. While not a primary thesis of Sinha’s book, she does indulge the claimed link between abolitionism and anti-capitalism, citing the NHC literature. The argument as she presents it is a strange one, relying largely on a rhetorical sleight of hand that notes “if slavery is capitalism, as the currently fashionable historical interpretation has it, the movement to abolish it is, at the very least, its obverse.”

Of course for that claim to be true, the currently fashionable NHC interpretation must first be accepted, and that remains a highly dubious proposition (for those interested, I critique this genre at length in What Is Classical Liberal History?, my new book with Michael Douma). But it is also wanting on another front. Establishing abolitionism as the obverse of capitalism requires – at minimum – some evidence of the abolitionists’ alleged hostility to capitalism.

Abolitionism was a complex and multifaceted movement spanning not only multiple political factions but also several continents, so providing substantiation for the claim is no small task. It must also get around the unambiguous philosophical affinities for laissez-faire political economy that several of the more prominent abolitionist leaders incorporated into their philosophical systems (William Lloyd Garrison in the U.S. and Richard Cobden in Britain, for example, both had strong philosophical proclivities toward free market or laissez-faire economics). And finally it must also address the pronounced anti-capitalist undercurrents that many of the late antebellum proslavery theorists put forth as their own (see here in particular).

A full discussion of these topics could probably fill an entire book, but one certain obstacle that the NHC reinterpretation of the abolitionists (as well as its more brazen variants among self-described socialist claimants of abolitionism) is a shortage of evidence in favor of the claimed link. One has to reach pretty deeply into the abolitionist barrel to find socialist adherents of the cause, and few if any of them had comparable stature to Garrison, Douglass, Sumner, Higginson or similar figures who operated more comfortably within classical liberal philosophical frameworks.

To get around this problem, a fairly recent article in the far-left magazine Jacobin attempted to make the case for “ideological connections between abolitionism and socialism” by turning to abolitionism’s slaveholding critics to make their argument for them. The meandering piece offers very little in the way of historical context to substantiate its argument, preferring instead to assert it by declamation and pad it a bit with armchair intersectionality theory that supposedly demonstrates an overlapping of various social causes. But they also bolster this claim with a list of cherrypicked quotations from slaveholders.

A pair of quotes come from the notorious pro-slavery theorist George Fitzhugh in which he ascribes socialist or communist monikers to his adversaries, albeit with very little context. This is done for a reason, as Fitzhugh himself is a poor witness to bring to Jacobin’s cause. They do so through selective editing, but only to omit the fact that Fitzhugh professed a radical anti-capitalist vision that trended strongly toward the philosophical tendencies of the reactionary socialist Thomas Carlyle. It was Fitzhugh who urged slave-owning southerners to “throw Adam Smith, Say, Ricardo & Co., in the fire” and who declared the theory of laissez-faire to be “at war with all kinds of slavery, for they in fact assert that individuals and peoples prosper most when governed least.”

Although now deprived of Fitzhugh, Jacobin has a few more testimonials for its case. The most prominent remaining example by far is future Confederate president Jefferson Davis himself, or so it would seem. Jacobin’s author accordingly quotes Davis asserting that “the European Socialists, who, in wild radicalism, . . . are the correspondents of the American abolitionists” and proceeding to place them in league with the French socialist-anarchist theorist Pierre-Joseph Proudhon. The crusade against slavery, he continues, would “superinduce attacks on all property, North and South” and, presumably, lead to an ascendance of socialism in America.

If no less than the president of the Confederacy declared that the abolitionists were in league with the socialists, then surely it’s a powerful case for not only the NHC genre but Jacobin’s own even more extreme spin in which the forces who stood against slavery also stood for socialist upheaval.

But there’s a problem. The unsourced Jefferson Davis quote is not a Jefferson Davis quote at all. It’s actually a misattributed passage by Caleb Cushing, a Massachusetts politician and diplomat who sided with the Union during the Civil War. Cushing’s address was delivered at a meeting in Bangor, Maine on January 6, 1860 and reprinted shortly thereafter in the newspaper excerpt below: 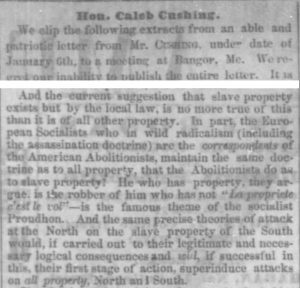 Where and how this passage received its misattribution is uncertain, as the Jacobin article gave neither a source nor even a date. The episode is nonetheless highly representative of the quality of the argument that article advances. Along with easily identified misrepresentations of Fitzhugh that obscure his avowed anti-capitalism, Jacobin‘s main evidence for a socialist-aligned “red abolitionism” comes down to a fake Jeff Davis quote.