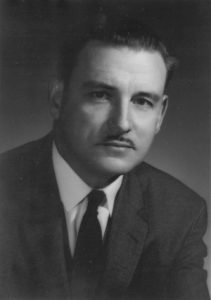 James M. Buchanan did not write very much on the subject of racial politics. The topic did not appear in any of his major works. He also tended to steer away from day to day political issues in general, save for when they touched upon a relatively narrow set of issues in his immediate scope of expertise (which mostly meant fiscal issues).

He was not completely silent though, and in fact I recently came across one of his earliest recorded views on the subject of segregation. It dates to his time as a graduate student at the University of Chicago in 1948.

But first a little context. Buchanan’s ideas on race did not derive from cultural reflections upon his southern origins while living in a northern city, from non-existent connections to Agrarian poets, or from John C. Calhoun. They were likely the product of price theory as taught at the University of Chicago at mid-century. And Chicago economics in that era had a distinctive flavor that linked anti-discriminatory principles with free market capitalism.

The views articulated by Buchanan’s UVA colleague and frequent collaborator Warren Nutter were highly typical of the Chicago approach in that era. In the 1969 lecture I revealed yesterday, Nutter harshly condemned segregation, including on the grounds that it impeded the operation competitive market mechanisms that typically undermined discriminatory practices. After all as a much-repeated saying went, markets are colorblind. Nutter’s argument directly reflected other anti-discriminatory arguments from the Chicago school. It cited and expanded upon the position articulated by Milton Friedman in a chapter of his 1962 book Capitalism and Freedom. And Friedman’s own analysis was itself essentially a non-technical popular audience explanation of the arguments set forth by his former student Gary Becker. The technical version of the argument appears in Becker’s 1955 dissertation-turned-book, The Economics of Racial Discrimination (which also, incidentally, borrowed Nutter’s earlier empirical classification of monopolistic industries in its comparative test for the presence of discrimination in monopolistic versus competitive situations).

Buchanan left several clues that he shared in Chicago principles when it came to issues such as discrimination and segregation. For example, in a September 1965 article for National Review, Buchanan expressed his concern that a then-pending federal minimum wage bill would “offset any economic gains that might have been expected from the 1964 Civil Rights Act.” Buchanan correctly noted that minimum wages tend to disproportionately penalize the most vulnerable members of the labor force – i.e. persons who lose or cannot obtain employment due to the price floor it creates. In the south, Buchanan explained, the most vulnerable persons “are heavily concentrated among Negro workers” who would be the first to feel the negative employment effects of the measure. Buchanan repeated this same argument a few months later in a letter (also co-authored by Nutter) to Virginius Dabney’s paper, the Richmond Times-Dispatch.

We may also see that these views filtered into the early projects of the Thomas Jefferson Center (TJC) for Political Economy – the research program that Buchanan directed at the University of Virginia. In 1958 Buchanan invited his former adviser, the University of Chicago economist Frank H. Knight, to deliver a series of lectures on democracy and political economy. Knight was the TJC’s inaugural Distinguished Visiting Professor – a position that Buchanan later gave to anti-Apartheid economist William H. Hutt in 1965. Knight’s lectures were assembled into a standalone monograph by Buchanan and Nutter, and published through the TJC in 1960. In one of the talks Knight theorized at length about the ill effects of racial discrimination upon a liberal society. As Knight explained in the fifth lecture during his stay (p. 136 of the book):

“Equality before the law means that there is equal opportunity for everyone to find or make his own place in society. This ideal was dishonored in the breach rather than honored in the observance for some time into the age of liberalism, notably by this country in the matter of racial discrimination. We were from a generation to a century behind the main civilized world in getting rid of slavery nominally based on race, but actually a caste distinction, and then had to do it by one of the most terrible wars in history. We still do not allow equal legal treatment, but discriminate on the fictitious ground of any supposed trace of alien racial blood.”

Recall again that Buchanan hosted Knight for these explicitly anti-segregationist remarks in the spring of 1958, which was also the high water mark of Sen. Harry Flood Byrd Sr.’s “massive resistance” fight against Brown v. Board. If the Buchanan, Nutter, and the TJC were trying to service the segregationist political establishment of Virginia, as has been charged, then playing host to Knight’s anti-discriminatory lecture and later publishing it makes for a very odd strategy of communication.

Of equal importance, Buchanan’s connection to Chicago principles may be affirmatively traced all the way back to his time as a graduate student. Which brings us to 1948.

Buchanan wrote his dissertation on the question of fiscal resource allocation problems under the conditions of a federal political arrangement, not unlike the United States. The dissertation is highly theoretical and contains the building blocks of many of Buchanan’s later works on the economics of taxation and on constitutional political economy. But there is also a fascinating aside, tucked into a footnote on page 73 of the document.

In the corresponding text, Buchanan was discussing the problems associated with fiscal efficiency among the constituent units of a federal system (i.e. states in the United States’ constitutional arrangement). Subject to certain conditions, Buchanan’s model predicted relatively strong incentives for states to efficiently utilize certain fiscal resources as a product of their size as political unit. The model was subject to several caveats, but was intended to tease out the effects of constitutional arrangements on basic functions of governments such as how they allocated their resources. While the size of the constituent unit seemed determinative to the situation, Buchanan noted that inefficient fiscal allocation could result from other “internal administrative faults and peculiarities” not linked to the size of the administrative unit. The accompanying footnote offered one such example:

“The one apparent illustration is the duplication of educational facilities in the southern states due to racial segregation. Only by allowing the citizenry of the states concerned to suffer the costs of their own inefficiency can improvement be expected.”

The brief but fascinating insight is a classic example of Chicago-style market analysis of discriminatory institutions. As Buchanan noted, one of the economic problems caused by segregation was its introduction of a substantial fiscal strain. Under segregation, taxpayers would have to bear the public expenses of operating a larger number of schools than would be the case under integration. Buchanan then noted that, holding all else equal, forcing states with segregation to bear the costs of this inefficiency themselves could become an effective fiscal mechanism to incentivize integration.

Note also that Buchanan was suggesting this as a means of alleviating segregation almost 6 years before the Brown v. Board decision. He had no reason to expect at the time that the federal government would soon reverse its longstanding legal recognition of segregation, so the referenced fiscal incentive actually served as an alternative way of taking on the problem.

Buchanan’s notion is, of course, only lightly developed. It was little more than a footnote to illustrate a broader point about why inefficient fiscal allocations occur in federalist systems. He did not expand it into a standalone proposal, nor did he discuss complications that might follow. But clearly – as early as 1948 – he was already thinking about the problem of segregation in economic terms that closely resembled similar exercises by his Chicago-affiliated contemporaries. His actions that followed – the speakers he invited, the collaboration between him and Nutter, and his own statements on the harms that bad economic policies would impose upon African-Americans – all appear to be consistent manifestations of the same anti-discriminatory economic principles that we find in the works of Friedman and Becker and Knight from the same period.