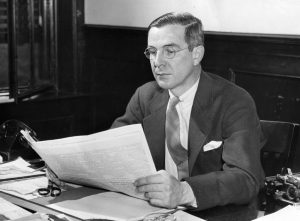 The ongoing controversy over Democracy in Chains by Nancy MacLean has provided no shortage of conversation material this summer, including an unintentional commentary on the degraded state of academic standards in the history profession. When I first read this book at the beginning of the summer, I was shocked at the sheer volume of factual inaccuracies and unsupported claims appearing on almost every single page. I documented a few of the more blatant errors at the time, as well as a couple of claims that appeared to be outright fabrications in the text.

Having a longstanding interest in James M. Buchanan’s ideas, I also started checking up on MacLean’s archival sources to see how accurately she represented her materials. One passage in particular struck me as needing further scrutiny. It concerned her depiction of a 1959 article that Buchanan and his University of Virginia colleague Warren Nutter wrote in response to the ongoing school desegregation controversy in the state. The article itself intentionally avoided wading into the racial politics of segregation, offering instead a brief overview of the political economy of public and private education systems. MacLean nonetheless makes it into her Exhibit A in a fanciful tale that accuses Buchanan and Nutter of opportunistically assisting a group of segregationist politicians from Harry Flood Byrd, Sr.’s political machine in an ill-fated attempt to circumvent the Supreme Court ruling of Brown v. Board of Education.

The passage that stood out appears below:

Specifically, it strongly implies that Buchanan and Nutter timed the release of their education article with James J. Kilpatrick, a Byrd-aligned newspaper editor. The suggestion of coordination is odd because Kilpatrick edited the Richmond News-Leader, widely known at the time as an uncompromising segregationist rag. Yet as MacLean’s final sentence acknowledges, Buchanan and Nutter actually published their article in the competitor Richmond Times-Dispatch.

Kilpatrick is a central figure in MacLean’s story. In addition to implying direct coordination in this passage, she portrays Kilpatrick as a primary intellectual link between Buchanan’s academic projects and Virginia’s segregationist political class. The link is necessary to her story because, as MacLean concedes at one point, there is no evidence that Buchanan and Byrd ever met each other let alone worked together on a scheme to preserve school segregation. So I decided to investigate the relevant archival materials, and see what Kilpatrick and Buchanan actually said to each other.

It turns out that the answer is exceedingly little. Kilpatrick’s papers at the University of Virginia contain only two letters from Buchanan, as well as another two from Nutter. None concern the 1959 education paper. Furthermore, they suggest no more than a passing acquaintance between the two economists and Kilpatrick.

Buchanan wrote Kilpatrick all of twice. The first was in 1965 to forward a copy of Gordon Tullock’s book Bureaucracy in a solicitation of a routine book review from the paper. The second was in 1967 to request a copy of an op-ed on Social Security reform that reportedly cited one of Buchanan’s academic works. Nutter similarly corresponded with Kilpatrick all of twice. The first was a form letter in 1958, sent to three different newspaper editors. It pitched a story on the government’s attempted suppression of an academic book about Japanese Internment during World War II, highlighting Earl Warren’s hypocritical involvement in that tragedy. The second exchange of letters involved a request for newspaper coverage of an upcoming lecture at UVA by Sen. Barry Goldwater in 1966. Nutter had been an economic adviser to the Goldwater presidential campaign in 1964.

None of these materials even remotely support the charge of coordination between the economists and James J. Kilpatrick over the school segregation issue. Instead, they suggest the men barely even knew each other and only then as it concerned unrelated matters separated from the education paper by several years.

There’s another story that MacLean missed however, and that concerns the second newspaper – the Richmond Times-Dispatch. It was edited at the time by Virginius Dabney, himself a veteran civil rights supporter who won a Pulitzer Prize in 1948 for waging a fight against Virginia’s poll tax. Dabney was also an early public supporter of desegregation who pushed to end the institution on Richmond’s streetcars and who directed his newspaper’s scrutiny into the activities of the Ku Klux Klan. By the late 1950s the owners of the Times-Dispatch – seeking to avoid the ire of the Byrd machine – barred Dabney from openly editorializing against “massive resistance” to school desegregation. He stated that he personally opposed the segregationist program though, and positioned himself as a proponent of a more gradual “limited integration.” Dabney revealed that the paper’s owners had restricted his editorial page after his retirement in 1969. In any case, at the time of the Buchanan-Nutter article, the Times-Dispatch was still widely known as the more moderate of Richmond’s two papers compared to Kilpatrick’s virulently segregationist News-Leader.

Dabney’s role in this story is important though because, unlike Kilpatrick, he actually was involved with the economists’ Thomas Jefferson Center (TJC) at UVA. The connection came from a longstanding friendship with Nutter after the two were introduced in 1957, shortly after the founding of the TJC. Nutter and Dabney discovered that they shared a mutual dislike for the rising tide of central planning in the economics profession of the day. As Dabney explained in a letter to Nutter on July 2, 1957, “One of my great worries has been the tendency of teachers of economics to take the Keynesian road, and to defend huge government spending, socialization of public utilities and nearly everything else.”

An intellectual friendship was struck. Or as Dabney put it in the same letter, “I think we’re going to turn out to be a couple of soul-mates after all.” Nutter responded by sharing a copy of the new TJC’s founding prospectus with Dabney. Over the course of the next decade until Dabney’s retirement from the newspaper, they corresponded regularly about such issues as the TJC’s activities, the Goldwater campaign, and a series of academic studies that Nutter published on the Soviet economy.

All of these records point to a far more likely explanation of how the 1959 education article made its way into print. Rather than coordinating with Kilpatrick of the News-Leader as MacLean claims, Buchanan and Nutter were actually working with Dabney of the Times-Dispatch.

Although Dabney’s personal files do not contain the newspaper’s records that might show when the article was submitted, they do include a later set of correspondence where Nutter invited Dabney to review proofs of the same article after the TJC issued it as a standalone pamphlet. Combined with Nutter’s personal friendship and extended correspondence, Dabney’s paper was an obvious venue to run the original article by Buchanan and Nutter on April 12-13, 1959.

This episode is illustrative of the overarching presence of confirmation bias in MacLean’s book. She approached her project with a zeal to link Buchanan to the discrediting reputations of Virginia’s leading segregationists. Kilpatrick fit this billing, so she appears to have written him into the story on the flimsiest of evidence. Yet in doing so she completely missed the more obvious and thoroughly documented connections between the TJC and Dabney.

She did not see Dabney because he was not consistent with the preconceived segregationist narrative she was looking to find. Or invent in the case of its failure to turn up.