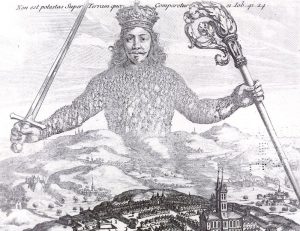 Today I’ll offer a quick observation on the ongoing controversy about Nancy MacLean’s Democracy in Chains.

In several recent interviews MacLean has presented her work as an “intellectual history” of James Buchanan. A few historians have come to her defense as well, taking a similar line and also suggesting that MacLean’s critics either don’t understand or are “misreading” the methods and “best practices” of intellectual history by focusing upon her thin documentation of the figures she presents as Buchanan’s intellectual influences.

This line of argument reveals a critical oversight in MacLean’s treatment of Buchanan. It also shows that the claim about “intellectual history” methods is largely hollow. That oversight is the 17th century English philosopher Thomas Hobbes.

If you are even minimally familiar with the work of Buchanan, you should know that one of the most important, recurring, and indeed ubiquitous thinkers that he engages across his vast body of scholarship is Thomas Hobbes. I’d even go so far as to suggest that it’s impossible to accurately write an intellectual history of Buchanan without understanding the deep complexities of his decades-long engagement with Hobbes’ work and his adopted role as Hobbes’ frequent interlocutor (yes, there are other figures like Frank Knight and Knut Wicksell who warrant similar notice for their formative influences on Buchanan’s political economy. Hobbes is a central figure – both utilized and engaged – in Buchanan’s political theory).

Nor is any of this a big secret. Buchanan probably refers to Hobbes a hundred times or more in his collected academic works, and three of his major books centrally engage what he calls the Leviathan model of government in a direct and obvious reference to Hobbes’ famous work.

So where is Hobbes in Nancy MacLean’s purported “intellectual history” of James M. Buchanan? Almost completely absent. He appears only once – a passing reference on page 33, where he is quickly cast aside and replaced by a completely imaginary connection to the obscure segregationist Agrarian poet Donald Davidson as the supposed source of Buchanan’s Leviathan concept.

So not only does MacLean appear to have invented a non-existent connection to Davidson. In doing so she unintentionally jettisoned a central figure – Hobbes – from Buchanan’s corpus of scholarship.