If you read Duke University historian Nancy MacLean’s new book Democracy in Chains, you will probably come away thinking that the late economist James M. Buchanan believed himself to be something of an intellectual heir to the Vanderbilt Agrarians of the 1930s. According to MacLean, these now-obscure southern literary figures were a main reason Buchanan wanted to go to Vanderbilt University.

Even though Buchanan’s family ultimately could not afford to send him to the prestigious university, MacLean claims that Buchanan owed these men a direct intellectual debt. They allegedly “stamped his vision of the good society and the just state.”  One of the Agrarians in particular, she claims, had a “decisive” influence on “Jim Buchanan’s emerging intellectual system” – the poet Donald Davidson.

MacLean has a very specific reason for making this claim, and she returns to it at multiple points in her book. The Agrarians, in addition to spawning a southern literary revival (the novelist Robert Penn Warren was one of their members), were also segregationists. By connecting them to Buchanan, she bolsters one of the primary charges of her book: an attempt to link Buchanan’s economic theories to a claimed resentment over Brown v. Board and the subsequent defeat of racial segregation in 1960s Virginia.

MacLean’s argument presents a challenge. Buchanan wrote very little on Brown or the ensuing school desegregation, and the archival evidence she presents from his papers is both thin and far short of the smoking gun she implies it to be. Instead, she sets out to strengthen her portrayal of Buchanan as a segregationist by tying him to other known segregationists. The Agrarians, and specifically Davidson, serve this purpose in her narrative by becoming formative intellectual influences on Buchanan.

There’s a problem with MacLean’s story though: it appears to be completely made up.

Her footnotes to the passages on the Agrarians don’t actually check out, and the Davidson link in particular appears to be a figment of her own imagination. I’ll walk through the sources in detail, starting with the passage where Davidson appears:

MacLean’s purpose here is to identify Davidson as the font for one of Buchanan’s most frequently enlisted concepts from his academic work – the all-powerful Leviathan state. Of course most students of political philosophy will automatically recognize that this metaphor is a famous one. It derives from the 17th century English philosopher Thomas Hobbes, as MacLean begrudgingly concedes. But Buchanan’s version of the Leviathan is different, she contends – a product of Davidson’s “new and distinctive” use to describe a northern-dominated post-Civil War federal government and thus a code-word for racially tinged “states rights” and other nefarious purposes.

There’s another problem with MacLean’s evidence. Donald Davidson’s name does not appear anywhere in Buchanan’s academic works. The massive 20 volume Collected Works of James Buchanan is searchable online. It contains most of his major books and papers and it does not yield a single hit for the name. Thomas Hobbes, by contrast, is one of the most frequently discussed figures in Buchanan’s works according to the index: 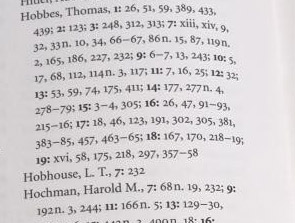 MacLean nonetheless presses ahead with her invented connection and attempts to tar Buchanan with a litany of vices from the Agrarians: sympathy with the Confederacy, voter suppression, and racial animosity toward African-Americans. These and other charges may be seen in the passage below from MacLean, including a quotation that she claims to show Buchanan’s endorsement of the Agrarians’ vision:

This passage points us to footnote 12 for the chapter for a list of its sources, which – again – purportedly link Buchanan to this literary group in ways that reflect all the aforementioned claims and charges. Except that’s not what the reader actually finds in footnote 12, or any of its neighboring notes on the Agrarians…

Along with the citations to a couple Agrarian tracts, what we find instead is a fairly boilerplate list of secondary literature on 20th century racism and its links to the Agrarians. The only reference to Buchanan at all is not an archival source but rather a citation to page 126 of his autobiography, Better than Plowing. Not recalling any passages that would support what MacLean claims here about the Agrarians, I turned to Buchanan’s autobiography to check the reference. The page appears below and consists of a single passing reference to the Southern Agrarians having been influenced by Thomas Jefferson’s famous concept of the yeoman farmer.

That’s it. There are no references to Donald Davidson. No segregationist visions, or pining over the Confederacy. No claims about wanting to study with the Agrarians at Vanderbilt. No intellectual nods to them at all, aside from a brief factual statement that they espoused a well known Jeffersonian argument about the agricultural lifestyle.

MacLean’s book has already caught some flak for factual misrepresentations of her sources. In this case she appears to have simply made up an inflammatory association and tacked it onto Buchanan in an effort to paint him as a racist. When scrutinized though in her own sources, it becomes quickly apparent that she has no actual evidence to sustain her many detailed and specific claims. When one actually searches for the link and checks her sources, it quickly becomes apparent that there is none. In fact, one could legitimately note that there are more references to the pro-segregation Vanderbilt Agrarians on Nancy MacLean’s own CV than in the entire Collected Works of James M. Buchanan.