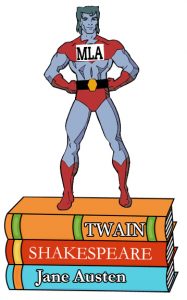 Literature took a clear back seat to ideological activism at the 2017 Modern Language Association Convention, held last weekend in Philadelphia. The annual conference is academia’s largest gathering for professors of English and foreign languages.

Academic conferences of this type are usually a venue for faculty to present papers showcasing the latest research in their fields. Judging by the MLA program though, English and foreign language literature professors are far more interested in “researching” pet political causes like climate change, globalization, and economic inequality than the study of literature.

A few examples are illustrative of the content of these panels. One entire panel explored strategies for using Composition 101 – usually a mandatory skills course that all freshmen must take – to promote environmentalist political activism. Another session with practically no discernible connection to English or literature purports to “examine the aesthetic mediations and political challenges of production chains and commodity flows and of mobility and work” using Marxian analysis. A third, featuring four English professors, purports to offer commentary on multiple environmental science topics ranging from climate change to oil spill cleanups to pollination studies. There are also panels touting Naomi Klein’s political tracts on inequality, panels on the connection between internet surveillance and globalization, panels purporting to investigate the history of slavery and capitalism, panels on confronting animal extinction, and even a panel on something called “New New Materialisms” with paper topics that shed no more light on their obscurantist content than the session title.

It’s possible that some of these presentations have scholarly relevance, though their stated topics appear to veer far outside of the professional competencies of a holder of a PhD in English or another MLA discipline. Some are overtly political, and most of these examples venture deep into issues that are traditionally the domain of political scientists, economists, sociologists, and even professionals in the hard sciences. Others – such as the aforementioned panel on infusing environmentalism into Composition 101 classes – focus upon using writing instruction to advance blatantly ideological causes to a point that approaches classroom indoctrination. We may nonetheless fairly ask how representative these types of topics are for the MLA program at large, which featured some 800 different sessions.

So…I decided to take a look. The following rough tallies show the number of MLA 2017 sessions that included at least one paper or presentation on an overtly political topic.

Some of this is standard fare, especially in Critical Theory-infected disciplines. But I was also curious how it stacked up against what most people think of as the scholarly domain of English professors, which is to say the standards of the literary canon. For comparison, here are the number of sessions that include at least one paper on a prominent literary figure’s work:

Though far from exhaustive, this list is meant to show an array of prominent literary figures and the comparative inattention they received. At 13 sessions, Shakespeare is the only literary figure that even comes close to the aforementioned political activist topics (and two entire Shakespeare sessions were specifically about finding environmentalist political themes in the bard’s works). Even prominent figures of late 20th century literary acclaim are neglected by comparison to ideologically themed presentations, including those from the far fringes of the political spectrum.  Toni Morrison was the subject of a single paper on one panel, which actually means her work had less of a presence on the MLA program than Maoist philosopher Alain Badiou.

Though informal, these findings are likely indicative of a deeper problem within English and the other MLA disciplines. Many academics in these fields appear to be producing highly ideological research that (a) is often far afield of their scholarly competencies and (b) sometimes ventures into outright pseudoscholarly territory. Areas of traditional expertise in literature, whether the “classics” or even a more diverse array of modern writers, are instead given second billing to environmentalist activism and Critical Theory-infused tracts on a litany of nakedly political causes.