Let me tell you a story about a major party’s nominee for President of the United States. It involves a candidate who had a storied political career, dating back almost three decades. This candidate held every conceivable position of importance. In addition to enjoying access to multiple presidents, our candidate was a recognized leader of a political party,  former U.S. Senator, and, most recently, the Secretary of State in the outgoing administration.

The candidate in this story was also notoriously corrupt. Some of those corruption charges went back many years. The most famous one involved a crooked real estate deal in Arkansas that personally enriched the candidate through fraudulent bank dealings and government access. The evidence of this corruption was strong, although previous investigations had never quite produced a criminal charge. Still, it was strong enough to make the candidate a divisive figure – so divisive, in fact, that a part of the candidate’s party refused to support a ballot with this individual’s name. Rumors of corruption cost the candidate the nomination 8 years earlier in a contest with a lesser known upstart from the Midwest who ran on reforming the government after a period of extended scandal. But the candidate lingered around and again sought public office.

Our candidate remained popular and exercised immense influence on policy during the next two presidential terms. Owing to continued displays of political clout and an intensely loyal following within the party, the candidate was eventually offered the Secretary of State as a consolation. Throughout this period, the country anxiously waited for the candidate’s next steps. Many anticipated another presidential run when our candidate published a widely circulated memoir about a lifetime in “public service.” When the opportunity presented itself 8 years later, the individual in question once again sought the White House.

This time our candidate secured the nomination. It was a controversial nomination that revived decades of scandal and public corruption. To temper the controversy and reunite the electorate, the party selected a little-known and uncontroversial senator from a swing state as its Vice Presidential nominee.

The divisions were deep though. After a brutal campaign and nominating convention, a portion of the candidate’s own party even resolved to oppose their nominee and jumped ship to other candidates. Then the scandal hit. The candidate had spent many years attempting to suppress evidence of the corrupt business and government arrangements. Rumors swirled of backroom deals and efforts to silence witnesses to the sordid affair. Then somebody obtained copies of letters written by the candidate, revealing decades of corruption, and leaked them to the press.

The candidate adamantly denied that the letters showed any evidence of criminality. The party spin apparatus kicked into gear and suggested they were simply a dirty trick from the opposing party. Some claimed the letters were forged. Others hinted that they came from foreign interests from across the Atlantic, charged trying to sway the outcome of the election. A partisan media repeated these defenses with little scrutiny, though the documents’ authenticity was overwhelming. Congress even held inquiries into the scandal. The opposing party alleged criminality and charged that our candidate had “prostituted…high office” for personal enrichment. The letters contained several particularly damning references, including instructions to destroy records of the scandal – to burn the evidence. No charges were ever filed though.

Our candidate remained in the race through election day. It turned out to be one of the most heated elections in history, with the outcome decided in a few key swing states. 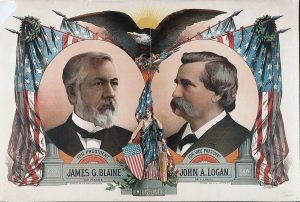