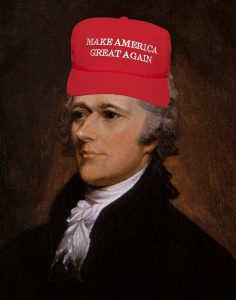 We are presently in the midst of a Hamiltonian revival. After sitting dormant for much of the 20th century, the first Secretary of the Treasury’s political program recently sprang to life in a vulgarized form through the Donald Trump campaign. While the Trump association has yet to taint Alexander Hamilton’s reputation despite their nearly identical economic viewpoints, his popular image has benefited immensely from a hagiographic broadway show.

One prominent theme of the latter medium is its glorification of Hamilton’s immigrant story. Born on the Caribbean island of Nevis, Hamilton migrated to the North American colonies as a teenager in 1773 (yes, this was technically an immigration within the British empire, but nonetheless his “foreign” birth continues to weigh heavily upon how he is perceived). Hamilton’s immigrant status is not merely a celebrated feature of his popular image – it is perhaps the central message of Lin-Manuel Miranda’s award winning musical, not to mention one that Miranda has exploited for its modern day political resonance.

Unfortunately, the Hamilton of legend is grossly mismatched with the Hamilton of history where immigration is concerned. Though he is celebrated as an immigrant success story in his own right, the historical Alexander Hamilton actually became an aggressive and sometimes vicious xenophobe by the end of his life.

Hamilton’s anti-immigrant shift came about almost entirely as a product of his efforts to consolidate political and military power during the Federalist presidency of John Adams. As friendly Hamilton biographers like Ron Chernow stress at length, he previously held relatively liberal views on immigration as expressed in his 1791 Report on Manufactures. Only 7 years later though, Hamilton had become a behind-the-scenes architect of the Alien & Sedition Acts. His ostensible reasoning was a reaction to the terrors of the French Revolution, and an almost paranoid belief that French supporters of his Jeffersonian adversaries were plotting to import Jacobinism into the United States. His anti-French sentiments rapidly expanded to include a fear of similarly imagined “subversive” activities by Irish Fenians, German radicals, and other immigrant groups at large.

As I noted in my last post, the “Alien” portion of the Alien and Sedition Acts referred to three laws that were designed to severely curtail foreign immigration into the United States. Two of the measures gave the president sweeping peace and wartime powers to detain and deport foreign nationals who allegedly posed a “danger” to domestic security. The third entailed a naturalization law that more than doubled the time required for a foreign born person to obtain United States citizenship and, with it, vote.

Chernow in particular portrays Hamilton as a somewhat reluctant latecomer to the Alien & Sedition Acts who only supported them after his party drove the measures through Congress. In reality, Hamilton was involved in their creation. On March 25, 1798 Speaker of the House Jonathan Dayton sent Hamilton a now-lost letter that apparently solicited his input on a list of legislative matters. Hamilton’s reply survives and indicates his support for the Alien and Naturalization bills:

“I agree that the President ought to have power to send out of the country suspected foreigners saving merchants who have six months by Treaty, which stipulation contemplating war must operate in the event contemplated. And let us perservere and set good examples.

Two months later, as the bills were being prepared and debated in Congress, he reaffirmed this position to Secretary of State Timothy Pickering. According to Hamilton, “the mass ought to be obliged to leave the Country” save for exceptions carved out for merchants.

Hamilton’s xenophobia intensified as the measures became law later that year. President Adams utilized his discretion to severely limit deportations under the Alien Friends Act, despite Pickering’s sometimes intense lobbying to deploy its powers. Hamilton likely wished for the same end as Pickering, or at least his surviving letters indicate as much.

Writing again to Dayton in late 1799, Hamilton railed against two “foreign” newspaper editors, the Irish-born John D. Burk and the Scottish-born James T. Callender. Hamilton’s fury derived from his frustration that they were not being deported or prosecuted for the anti-Federalist contents of their papers:

“Renegade Aliens conduct more than one of the most incendiary presses in the UStates—and yet in open contempt and defiance of the laws they are permitted to continue their destructive labours. Why are they not sent away? Are laws of this kind passed merely to excite odium and remain a dead letter?”

When the legislatures of Virginia and Kentucky passed resolutions condemning these measures as a violation of the constitutional protection for free speech, Hamilton called upon Congress to issue a “report exhibiting with great luminousness and particularity the reasons which support the constitutionality and expediency of those laws.” The Virginia and Kentucky Resolutions, he responded, were a “regular conspiracy to overturn the government,” their intention being “to encourage a hostile foreign power to decline accommodation and proceed in hostility.”

Hamilton reserved a particularly aggressive form of antipathy for one of his successors at the Treasury Department, the Swiss-born Albert Gallatin. His dislike for Gallatin dated to at least the Whiskey Rebellion of 1793, and devolved into outright foreigner-bashing by the end of the decade. In an 1802 political editorial, Hamilton took to raving in conspiratorial fashion about Gallatin’s influence on Thomas Jefferson’s cabinet:

“Who rules the councils of our own ill-fated, unhappy country? And who stimulates persecution on the heads of its citizens, for daring to maintan an opinion, and for exercising the rights of suffrage? A foreigner!”

The same article decried Jefferson’s efforts to repeal the Naturalization Act on the grounds that doing so would flood the country with “foreigners.” Hamilton blasted the extension of citizenship rights to immigrants because he believed that doing so would allow them to “get too early footing in a country.” Jefferson, he strongly insinuated, even owed his election in 1800 to too many “foreigners” being granted easy access to the ballot box.

A severe case of cognitive dissonance accompanied these and other anti-immigrant pronouncements by Hamilton, particularly given his own background. While Gallatin’s Swiss birth was a frequent obsession, he similarly railed against immigrants who came from within the British empire much like himself. The Irish-born anti-federalist congressman William Findley was another of his favorite targets for foreigner-bashing – even though Findley immigrated to the United States in 1762, a decade before Hamilton himself.

Others pointed out Hamilton’s hypocrisy in his own time, yet strangely his historical interpreters mostly give him a pass where immigration is concerned. Hamilton’s turn to xenophobia is as much a part of him as his protectionism, his debt consolidation program, his coauthorship of the Federalist Papers, and his role in drafting the Constitution itself. Obscuring this unpleasant fact, or dressing it up – literally – in song and dance routines that project the appearance of an enlightened pro-immigration immigrant, subjects his biography to an unsupported and fundamentally untruthful claim. In the meantime, it remains difficult to reconcile the “immigrant legend” of Hamilton’s popular reputation and acclaim with the reality of his deep personal hostility toward foreigners at the maturity of his political life.