Janek Wasserman has an article up at HNN, purporting to correct what he portrays as a “dogmatic” appropriation of the historical Austrian school of economic thought by American libertarians, free-marketeers, and business interests since the mid 20th century. Steve Horwitz has written a thorough retort of Wasserman’s argument, taking him to task for neglecting to do even a rudimentary survey of the literature from modern day academic practitioners of Austrian thought. Such slipshod research practices, to put it mildly, do not bode well for accuracy in Wasserman’s representation of the scholarly tradition he attempts to critique.

In reading the HNN piece though, something else struck me. In addition to his exposition of Austrian economics, past and present, he has a very weak grasp of the history of Austrian economics’ transmission to the United States in the 20th century. Having written on this subject myself, I was taken aback in particular by the following claim:

“When Austrian Economics was “revived” in the mid-1970s, only Hayek received an invitation to the conferences”

In this passage Wasserman is referring to a series of Austrian academic conferences that were organized by the Institute for Humane Studies (full disclosure – my current affiliation), beginning in 1974 and rapidly expanding following F.A. Hayek’s receipt of the Nobel Prize later that year. The argument he is trying to make here is that the Austrian “revival” from the 1970s to the present day represents something of a break from the older early 20th century Vienna-based Austrian school from which Hayek emerged. The implication is that Hayek, and particularly a  libertarian strain of Hayekian thought, rose to the forefront in this “revived” tradition at the expense of the older Austrian school’s academic focus and broader economic ecumenicism.

This claim chafes with the history of the 1970s program, even to the extent that many of the economists he places on the outside of the aforementioned revival – Fritz Machlup and Gottfried Haberler – were actually active participants in a much broader discussion than his narrative permits.

The first modern Austrian conference occurred in June of 1974 at South Royalton, Vermont, and is ably recounted in an article by the late John Blundell. I conversed extensively with Blundell about this and other events of the Austrian resurgence before he passed away last summer, making an effort to document the economists of note who participated in these formative conferences and panels. What struck me at the time, and what Blundell repeatedly emphasized, was the broad range of prominent scholars who took an interest in what was happening in the Austrian camp at this point in history. Not all agreed with a doctrinaire reading of Hayek and Mises, but contrary to Wasserman’s claim, the “revived” Austrian school of the 1970s had multiple thoroughly ecumenical dimensions that linked it back to its historical early 20th century presence in Vienna and London.

The most glaring omission in Wasserman’s piece is undoubtedly Ludwig M. Lachmann, a German-born economist who studied the original Viennese Austrian school in the 1920s, subsequently taught with Hayek at the London School of Economics, and went on to a lengthy academic career at the University of Witwatersrand in South Africa. Along with American-trained Austrians Israel Kirzner and Murray Rothbard, Lachmann was one of the three primary lecturers at the 1974 conference. He lectured at 11 additional IHS conferences before his death in 1990, and spent his retirement on an annual winter visiting professorship at NYU from 1975 to 1987. 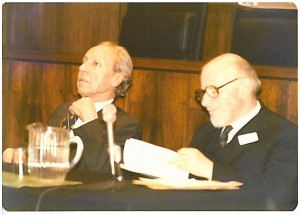 The 1970s revival drew in multiple other veterans of the Austrian school’s Vienna and LSE days. The German-born Emil Kauder, an important interpreter of Carl Menger, participated in the 1975 Austrian conference in Hartford, Connecticut. Princeton’s Fritz Machlup, presented by Wasserman as having been largely excluded from the modern Austrian resurgence, was actually an active presence during the “revival” years. Though distinctively cautious in his own liberalism, he brought substantial credibility to the “new” wave of Austrian scholarly output, working in particular with the University of Virginia’s Leland Yeager and Lawrence Moss to establish what became a lasting Austrian presence at mainstream academic conferences. To this end Machlup chaired an important early session on Austrian thought at the 1974 Southern Economics Association meeting, which was also published in book form, presided over a lunch panel on Austrian thought at the 1975 American Economics Association conference (attended by Haberler as well as future Nobel winners James Buchanan and William Vickrey), and lectured at the 1978 IHS Austrian conference at NYU. Haberler similarly attended a number of Austrian-themed events that IHS sponsored in the early 1970s, as did multiple LSE era veterans of note who crossed paths with Hayek in the 1930s. Other recurring presences at these Austrian events from broadly aligned intellectual traditions included such notables as Buchanan, Harold Demsetz, and Gordon Tullock.

The LSE group sometimes hailed from outside the Austrian camp, though its members actively conversed with the Austrian literature and shared the common link of studying under Hayek in the 1930s. Two of his students Abba Lerner and G.L.S. Shackle each attended an Austrian outreach conference in 1974, and Shackle contributed a paper to an IHS-sponsored book of essays on new Austrian research themes. Hayek’s old LSE colleague Lionel Robbins similarly addressed an Austrian conference organized by the London-based Carl Menger Society in 1976, with Hayek present as a commentator and his old LSE student Arthur Seldon as an organizer. John Hicks, the famous Keynesian economist and fellow Nobel laureate, also presented at the 1978 NYU Austrian conference. He contributed a chapter to a book on new Austrian research themes that grew out of the event, praising the anti-inflationary insights of the Austrians and suggested the broader discipline needed room for Mises and Keynes alike. Lachmann – whose academic association with Hicks went back over four decades – provided the response.

Now it is entirely fair to note that these names include a very diverse and eclectic group. Some such as Lachmann were central contributors to the Austrian resurgence, whereas others simply crossed paths with the historical Austrian tradition at Vienna and LSE. Yet these conferences, panels, books, articles, and edited volumes were all components of an effort to rejuvenate the Austrian scholarly tradition of old, and tap into its renewed academic interest after the South Royalton meeting and Hayek’s nobel. Plainly that interest extended well beyond the “small group of [libertarian] businessmen and radicals” of Wasserman’s simplistic and ideologically tinged portrayal.

Of equally important note, Wasserman grossly misunderstands the historical transmission of Austrian thought to the United States. In his telling, this event flows from Hayek’s 1945 book The Road to Serfdom, and only gains traction after a subsequent generation of libertarian businessmen and other pejoratively-categorized “neoliberals” adopted it into a free market ideological canon. He makes no mention of the prior academic transmission of Carl Menger and Eugen von Boehm-Bawerk through their own German-trained American contemporaries at the turn of the 20th century. These so-called American-Austrians included Princeton’s Frank A. Fetter and Cornell’s Herbert Davenport, both of whom served terms as president of the American Economic Association. Fetter almost single-handedly introduced the Mengerian concept of subjective value to the American economic scene, and later laid the groundwork for a favorable reception of Mises’ work in the United States. Davenport largely framed the Austrian school’s reception in the United States with a series of important essays on its distinct contributions to economic thought. Of equal note, two of his graduate students played significant roles in subsequent American engagement with Austrian ideas. During his long tenure at Cornell, Davenport was the PhD adviser of Frank Knight of later “Chicago school” fame and, less known, F.A. “Baldy” Harper – the founder of IHS who laid the groundwork for the modern Austrian revival before his untimely death in 1973.

Stunningly, Wasserman seems to be completely unaware that this parallel transmission of the original Austrian school to the United States even occurred. Rather, he views the modern Austrian school in strictly ideological terms that often approach caricature levels. This includes asserting a superficial free market idealism that its modern academic practitioners generally do not espouse, yet in doing so Wasserman also betrays that he does not actually understand the tenets of his subject matter. Modern Austrians are not skeptical of government economic interventions because they violate some sacred laissez-faire ideological precept, and they do not gravitate towards classical liberalism from a belief that markets can do no wrong. Rather it is the Austrian concept of subjective value that makes its practitioners deeply skeptical of the efficacy of economic planning. An Austrian predilection for classical liberalism is not the cause of this belief, but is rather its commonly derived consequence.

Interestingly enough, Davenport’s student Harper explained as much when addressing this question in his own survey of the Austrian school, penned in 1966:

“Though some contend that economics is completely and permanently separate from the concerns of political and philosophical matters, most of the persons of the Austrian School of economic thought have been of the classical liberal position. There have been variations, of course, in detail; and the classical liberal position has also been upheld by persons of widely different economic views. But in the main there has seemed to be a close relationship between the two.

The reason for this is doubtless due to the fact that when one accepts the views of the Austrian School, as to subjective value and all this entails, he sees a deeper meaning in individual rights and the concerns of private property. He sees how one person cannot accept the responsibility of making another person’s decisions for him; he can only make decisions in his own right under abandonment by the other person of his rights.”

Wasserman would do himself well to attempt a more charitable understanding of this position as well as the rich historical literature on the subject of the modern Austrian tradition before proceeding to more ambitious projects on this subject.