In a previous post, I noted that one of the stranger characteristics of the larger body of inequality literature produced by Thomas Piketty and two of his frequent collaborators, Emmanuel Saez and Gabriel Zucman, seems to be a tendency of their arguments to invariably end up at the same place: a call for high progressive taxation. 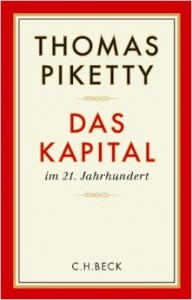 This was true of their respective interpretations of two different measures of U.S. wealth inequality that showed dramatically divergent trend lines over the exact same period starting in the mid 1980s. The older of the two studies showed a flat inequality trend, which was touted as vindication of several decades of high progressive taxation. The newer study showed a sharp increase in inequality for these years, which they interpreted as a justification for…high progressive taxation.

Piketty has a new paper out in the current issue of the Journal of Economic Perspectives, ostensibly responding to some of the criticisms of his work. While he only briefly touches upon the empirical discussion, he does concede “that the data sources about the distribution of wealth that we have at our disposal are insufficient.” Piketty was directly conceding a similar point raised by Wojciech Kopczuk in the same issue.

My new article with Bob Murphy makes a similar point, noting the “mismatch between the actual strength of the empirical evidence” on U.S. wealth inequality – which shows divergent and largely ambiguous trends – and the rhetoric claiming that inequality is on the rapid incline.

While the concession of data quality issues is a welcome acknowledgement from Piketty who has thus far tended to severely overstate the strength of his evidence on this point, he quickly appends it with a caveat that is simply astounding. The deficiency of the data – he informs us – is not in fact a reason to exercise caution in making bold claims about rising inequality (He still endorses the new Saez-Zucman “capitalization” estimate, which as of this writing has yet to pass peer review, all the while carefully sidestepping the many noted complications with its own data).

Still, Piketty is quite certain that U.S. inequality is rapidly expanding, even after acknowledging that the empirical evidence behind this claim is insufficient. His explanation: It’s not actually a lack of evidence for the purported trend that’s the issue. Rather, we simply don’t have the high progressive taxation regime in place that would generate the necessary tax data to show it!

“However, it is clear that these evolutions remain relatively uncertain. In my view, this makes the lack of transparency about wealth dynamics—largely due to the absence of a comprehensive wealth tax and the limitations of international coordination—particularly problematic.”

Yes, you read that correctly. Rising inequality simply must be there, and the only reason we can’t clearly see it is because we lack a punitive “wealth tax” scheme to generate this data.

For all their appeals to evidentiary empiricism, the recurring message of this strain of the inequality literature is actually anti-empirical and anti-scientific. All data points utilized in their analysis, including conflicting ones, seem to point to the exact same objective of high progressive taxation, no matter what trend they appear to display. Or fail to display for that matter.