In a recent column for the Washington Post, political scientist Henry Farrell attempted to lay part of the blame of two notorious historical events on what he sees as a “laissez faire” mentality that operates at the expense of human suffering. The occasion for Farrell’s claim is a curious one. He employed an ill-worded and somewhat tactless review of a recent book about slavery in the Economist magazine to remind readers that the same magazine had made similarly callous remarks about the victims of the Irish famine.

While his observation might carry some weight if it illustrated a standing pattern, his particular offense in the second case comes from a much older column – as in something that was published in 1847.

If taking modern publications to task for the uncouth musings of long-dead editors sounds slightly odd, it might be similarly observed that the Washington Post is far from immune from an ignominious publication record as this racially charged 1902 headline attests: 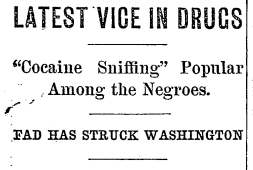 Turning specifically to the famine, a studious reader might also notice that Mr. Farrell seems to have a strange affinity  for flogging this 167 year old hobgoblin whenever the Economist’s masthead comes up for discussion. More problematic from a historical perspective though is the argument he attempts to extract from the episode:

In both instances, The Economist’s deep-rooted fondness of laissez faire slipped into a shameful tendency to minimize the human costs of those at the wrong end of the system, whether it was those who suffered and were murdered beneath the whip of slavery or those who starved to death, in part thanks to The Economist’s own vigorous advocacy.

A damning indictment of laissez faire capitalism, one might conclude, if only it were true! Unfortunately for Mr. Farrell, he has his 19th century politics confused, and confused badly at that.

Consider the repeal of the Corn Laws in 1846. This hallmark of the very same 19th century “laissez faire” philosophy he derides as callous was actually carried to fruition as part of a conscious effort to relieve famine-plagued Ireland from the artificially onerous food prices that came about under Britain’s agricultural protective tariff regime. Now consider Farrell’s harsh depiction of free markets against the open humanitarian appeal of the following passage from an 1845 free trade speech by Richard Cobden, the chief architect of the Corn Law repeal:

We do not come to talk about the principle which is applicable to all times and seasons; but what, I ask, is the natural and obvious remedy, under existing circumstances, against the gaunt famine that threatens a country like Ireland? You would say, ‘Open wide the ports, and admit the bread of the whole world to feed the people.’ That is the obvious and natural remedy —that is the remedy which an enlightened despot would at once fly to. Witness Russia, witness Turkey, or witness Germany, Holland, and Belgium; these Governments have not waited, but when their people have been threatened with want, they have at once thrown open their ports, and in some cases stopped exportation, in order to supply their people with abundance of the first necessaries of life. Why has not our Government taken a similar course? Why have they waited to learn Christianity from the Turk, or humanity from the Russian? Why have they waited to learn Christianity from the Turk, or humanity from the Russian? Is it because our Government is less merciful than that of the Mahometan Sultan? Is it that our boasted constitutional power is less humane than that of the despot of Russia? Or is it that our Prime Minister, who holds the responsible position of Sultan in this country—is it because he is afraid that if he takes the step—the obvious and natural and necessary step—he will not have the support of the country in throwing open the ports of this kingdom to foreign corn? If that be his doubt, we meet here to give him all the support which we can give him. I hesitate not to say, that whatever may be the attempts of the aristocracy to thwart the Minister in taking such a course, there is popular power enough in the country to support him in that act of humanity.

A similar observation applies to the issue of abolitionism, which actually found some of its strongest backers in the very same school of “laissez faire” liberalism that Farrell detests. The occasion of Thomas Carlyle’s famous branding of economics as the “dismal science” is a particularly telling witness to this tendency. Though far less known than the moniker it created, Carlyle actually employed the term to attack the strong political alliance between the “supply and demand” social scientists – the free market economists – and “Exeter Hall,” a reference to the favored meeting hall of the British Anti-slavery movement (you can read more about that here). The passage in full comes from a particularly nasty and overtly racist tirade by Carlyle, leaving no doubt as to who stood opposite of him and on the philanthropic side of the slaves: 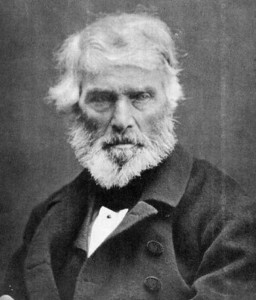 Truly, my philanthropic friends, Exeter Hall philanthropy is wonderful; and the social science — not a “gay science,” but a rueful –which finds the secret of this universe in “supply and demand,” and reduces the duty of human governors to that of letting men alone, is also wonderful. Not a “gay science,” I should say, like some we have heard of; no, a dreary, desolate and, indeed, quite abject and distressing one; what we might call, by way of eminence, the dismal science. These two, Exeter Hall philanthropy and the Dismal Science, led by any sacred cause of black emancipation, or the like, to fall in love and make a wedding of it — will give birth to progenies and prodigies: dark extensive moon-calves, unnameable abortions, wide-coiled monstrosities, such as the world has not seen hitherto!

To bring the matter full circle though, let us return to the famine question in the eyes of Carlyle as manifested in an imagined public address amidst the uproar “from all manner of Economists, Emancipationists, Constitutionalists, and miscellaneous Professors of the Dismal Science.”

“Work, was I saying? My indigent unguided friends, I should think some work might be discoverable for you. Enlist, stand drill; become, from a nomadic Banditti of Idleness, Soldiers of Industry! I will lead you to the Irish Bogs, to the vacant desolations of Connaught now falling into Cannibalism, to mistilled Connaught, to ditto Munster, Leinster, Ulster, I will lead you: to the English fox-covers, furze-grown Commons,New Forests, Salisbury Plains: likewise to the Scotch Hill-sides, and bare rushy slopes, which as yet feed only sheep,–moist uplands, thousands of square miles in extent, which are destined yet to grow green crops, and fresh butter and milk and beef without limit (wherein no `Foreigner can compete with us`), were the Glasgow sewers once opened on them, and you with your Colonels carried thither. In the Three Kingdoms, or in the Forty Colonies, depend upon it, you shall be led to your work!

“To each of you I will then say: Here is work for you; strike into it with manlike, soldier-like obedience and heartiness, according to the methods here prescribed,–wages follow for you without difficulty; all manner of just remuneration, and at length emancipation itself follows. Refuse to strike into it; shirk the heavy labor, disobey the rules,–I will admonish and endeavor to incite you; if in vain, I will flog you; if still in vain, I will at last shoot you,–and make God`s Earth, and the forlorn-hope in God`s Battle, free of you.”

The very core of the problem with the laissez-faire economists, in Carlyle’s eyes, was that they cared about the “cannibals” of Connaught – “Cannibals All!” in the appropriation of one of his most vigorous advocates – whereas what the famished peasants of the Emerald Isle needed was not food but obedience to order, and order of the type where shooting them dead was a second best alternative. That Farrell casts his blame upon the dismal scientists of all people amidst these glaring unpleasantries reveals at best a bias of ignorance; at worst a manifestation of intentional libel against laissez-faire.

The period to which Farrell refers provided no shortage of persons who “slipped into a shameful tendency to minimize the human costs of those at the wrong end of the system” to be sure. They tended not to situate themselves among the practitioners of free markets though. Rather, as we find in Carlyle (and his American disciple George Fitzhugh), those who would readily abandon Ireland to starvation and envelope themselves in the brutal “social order” of slaveocracy also happened to be laissez-faire’s harshest and most vocal critics.